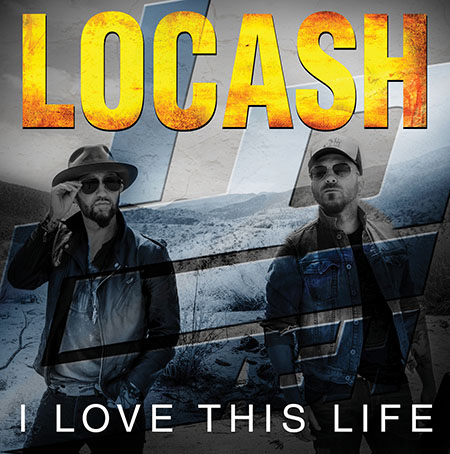 Village Voice calls them “seasoned songwriters in detailing the carefree Southern lifestyle,” and Entrepreneur Magazine writes, “They bring to the stage an amazing and sincere energy unlike anything [we’ve] ever seen at a concert before.” Sure enough, the rising duo LOCASH has wowed critics and crowds nationwide on their I Love This Life Tour, and catapulted the radio charts with the highest charting single of their career, “I Love This Life,” coming in at No. 23 on the Country Billboard radio charts this week and surpassing 100,000 downloads.

Now, on the heels of it all, LOCASH announces the release of their new six-track E.P., I Love This Life, on Friday, October 30 featuring the hit radio single, as well as fan-favorites like “Shipwrecked” and “I Know Somebody.”

The I Love This Life E.P. will be released on Reviver Records and was produced by Lindsay Rimes and David Ross. It will be available at the end of the month as a digital download nationwide on iTunes, Amazon and other online retailers.

“I cannot wait for the current and future LOCASH fans to hear what we have been working so hard on. It’s a new and established sound for us. Something fresh, with the LOCASH flavor and the roots of country music,” said the duo’s Chris Lucas.

Preston Brust added, “This new project captures real feelings mixed with melodies we hope everyone can relate and sing along to. We are in a really great place in life and I think these songs are windows into our lives right now. I couldn’t be more excited or more proud of it!”

Five out of the six songs on the new E.P. were penned by Brust, Lucas or both. Stand-out track, “Shipwrecked,”– the song which influenced the name of their signature wine line developed in partnership with Stonum Vineyards — particularly presents a new musical dimension to LOCASH.

“I had been listening to a lot of John Legend at the time, so I wanted a song that sounded like John Legend, with some guitar in it, but I wanted the lyrics to be really honest,” the duo’s Preston Brust told The Boot. “A lot of people, when they’re interviewing us, they’ll ask a fun question and it’s always the same: ‘If you’re shipwrecked on an island, what’s the one thing you have to have?’ And so, I sat down at the piano, and I said [to myself] ‘You know what, here’s what I’ve got to have.’ You’ve got to hear the song to find out, but it’s really cool. It’s a really cool song,” he added.

LOCASH also recently premiered the new music video for “I Love This Life” on all CMT platforms including CMT Pure, CMT Artists App, CMT.com and social media sites on August 26. Produced by Channel Greatness with direction by Stokes Nielson, the video is a montage of the duo in the stunning red rocks of Garden Of The Gods, Colorado, pieced with documentary-style footage of life on the road with fans.

I Love This Life is LOCASH’s first new album release since their self-titled debut in 2013. As songwriters, they’ve celebrated a pair of hit singles with “You Gonna Fly” (by Keith Urban), which topped the charts, and the Top 10 “Truck Yeah” (by Tim McGraw), among others for artists like Joe Nichols, Parmalee and Scotty McCreery. Get the duo’s full career backstory in their new EPK.

LOCASH is currently out on the road across the nation on their I Love This Life Tour.