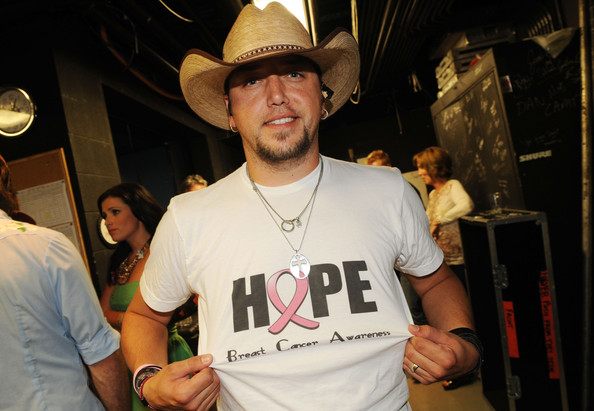 After record-shattering attendance numbers, triumphant sold-out stadium runs and over two million tickets sold, CMA nominee Jason Aldean wrapped his 2015 BURN IT DOWN TOUR “in his customary fashion” (Sun-Sentinel), lighting up Coral Sky Amphitheater in West Palm Beach, FL Saturday night (10/24). The night marked his 10th Annual “Concert for the Cure,” where Aldean presented over $615,000 to Susan G. Komen South Florida, which was raised from a portion of ticket sales over the course of the tour. 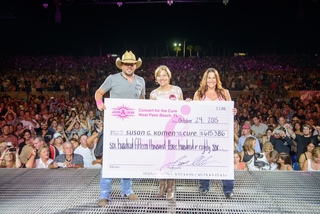 “I know first-hand how important it is to find a cure for breast cancer,” said Aldean. “So, looking out from stage Saturday night at a sea of pink was a pretty cool way to end the tour. For ten years now the fans have been helping us support Komen and I know we’re going to keep it up until nobody has to fight the disease anymore.”

Fans and critics flocked to catch “the ultimate concert” (People) at stadiums, arenas and amphitheaters across the country including his historic concert as Rose Bowl’s first-ever country headliner in addition to breaking attendance records at AT&T Stadium, Lambeau Field, Target Field, MetLife Stadium and Arrowhead Stadium.

Continuing the momentum, Aldean will launch his 24-city WE WERE HERE 2016 TOUR on Jan. 15, with special guests Thomas Rhett and A Thousand Horses before making his first-ever trip to Australia where he’ll also play a string of headlining dates.

Aldean’s latest Top 10 single “Gonna Know We Were Here,” where the new tour drew its name, follows 16th No. one hits and three consecutive chart-toppers from his PLATINUM certified album OLD BOOTS, NEW DIRT. It is currently nominated for “Album of the Year” at the approaching CMA Awards as well as “Favorite Country Album” at the upcoming AMA’s where Aldean additionally nabbed a “Favorite Country Male Artist” nod.

For more information and for a full list of upcoming tour dates, visit www.jasonaldean.com.