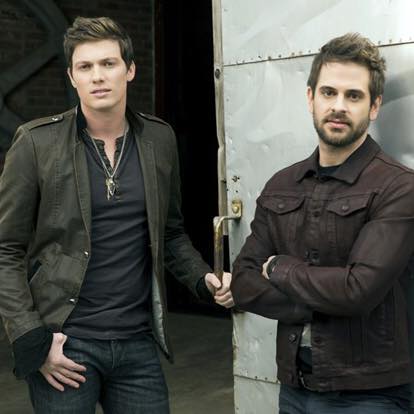 Hot new duo WATERLOO REVIVAL is heating up Country radio airwaves, fairs and festivals this summer with their scorching single “Bad For You.” Named one of Rolling Stone Country’s 10 New Artists You Need To Know, George Birge and Cody Cooper are giving fans another visual of their catchy lyrics and twangy-harmonies through a brand new music video.

Shot just outside of Nashville and directed by Brian Lazzaro, the fun and frisky scenes depict an unexpected adventure after the duo’s truck breaks down outside a fruit stand. Using a modern twist on The Garden of Eden, the video captures temptations and excitement of young hearts stirred up by sunshine and song lyrics reflected in the up-tempo tune.

The track is scoring radio airplay and rave reviews: Rolling Stone Country praises that it, “…taps into country’s new fascination with funky power pop — with thrilling results” and Billboard notes the “poppy, high-octane ‘Bad For You’ pumps and pushes for a lightning-paced two minutes and 29 seconds…”

The pair, who became friends in middle school, began creating music together as a hobby but their undeniable talents pushed Waterloo Revival to pursue a creative path full time. Since relocating to Nashville to hone their craft, the Texas natives have embarked on a quest to spread their native roots and Austin’s iconic music scene across the rest of the country. Their Big Machine Records debut single “Hit the Road” highlighted their quest from local backyards and regional clubs to major festivals and radio shows. Waterloo Revival offers an ode to their hometown but the revival across Country music has only just begun.

Waterloo Revival will mark another huge milestone on Tuesday, September 8 with their Grand Ole Opry debut. For tour dates and more, visit WaterlooRevival.com.