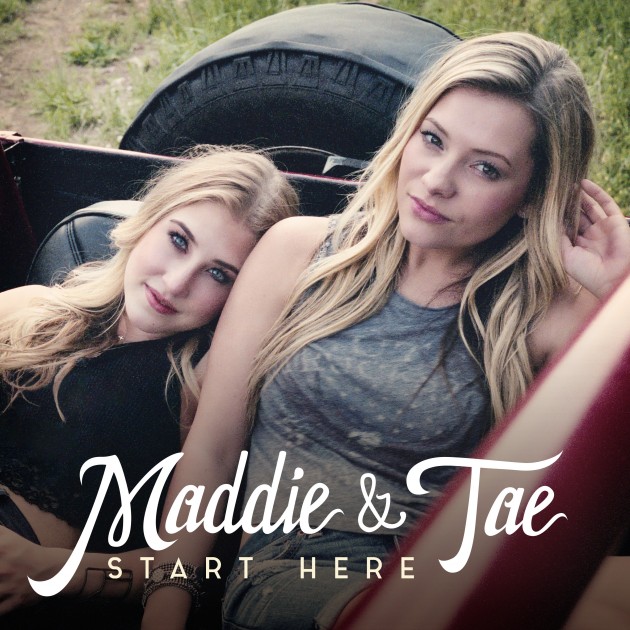 Dot Records recording artists, Maddie & Tae, are gearing up to release their debut album, START HERE, on August 28. The country duo made a significant mark on country music immediately with their debut single, “Girl In A Country Song.” The momentum continues with their latest release, “Fly,” as it consistently climbs the country charts.

CountryMusicRocks got the opportunity to catch up with Maddie & Tae to talk about the new album, songs that are personal to them, touring with Dierks Bentley, being the only females on the Sounds of Summer Tour, and so much more! Check out the interview below.

CountryMusicRocks (CMR): You’re gearing up to release your debut album, Start Here. Give us a little background and tell us about this new collection of music.

Tae: This album is basically our story for past 5 years. We’ve got songs about bullies, fishing, growing up, falling in love, and dreaming. That’s just what we’ve experienced and we stay really honest with those stories. You can also hear our 90’s country influences all over this record with the steel guitar, fiddle, dobro, etc. The honest feelings and acoustic instruments played a huge part in making this our DREAM record!

Maddie: This record is the story of lives for the past 5 years. Every song came from a true story or true feeling. I’ve always gravitated towards music that was honest and you could tell that artist wen through that situation so that’s what we aimed for. There is a thread that goes through this whole album. It’s almost like a storybook in 11 songs. Honesty is the common theme throughout the entire record.

CMR: What was one of your favorite moments in the studio recording your debut album?

Tae: The environment while recording this album was so inspirational. Being surrounded by such talented musicians and DANN HUFF really made me feel blessed to be doing what I am. We were also heavily involved with it all as well so it was fun to experiment and have fun with some of the songs!

Maddie: I loved getting to record vocals with Dann Huff at his home studio. He challenged me and proved that I was capable of more than i thought i was vocally. Getting to be creative with such a musical genius was an experience i will always cherish. I also loved getting to know all of the incredible musicians that played on our record. We had so much fun all tighter for a couple days in the studio.

CMR: If you each had to choose one song from “Start Here” that you have a significant connection to, what song would it be and why?

Tae: Smoke. That’s a pretty personal story about a relationship I went through. I learned some lessons about love the hard way but I wouldn’t trade it for anything.

Maddie: Downside of Growing Up is a song i still live everyday. The biggest lesson I’ve learned from moving away from home, being on my own at 17, and having so much change happen so quickly in my life was learning that its OKAY to not have everything figured out. None of us will ever have it figured out. Being uncomfortable is a beautiful thing because you are growing. You can’t grow when you are comfortable so take those chances and make mistakes because that’s what makes you YOU and makes your story unique and special.

CMR: It takes a lot of time and hard work in the studio recording an album. When you heard the final, mastered studio album from start to finish, do you remember that moment and what one of your first thoughts hearing the completed project?

Tae: It’s a really special moment when you hear songs that you poured your heart into come to life! I remember being in awe of the incredible work Dann Huff and all of the musicians did and it was almost like a “WE DID IT!” moment. We started writing this album when we were 15 so to finally hear some of them completely put together like that was really amazing.

Maddie: I remember downloading the competed record on my phone and made a playlist and drove around for hours jus listening. I feel like we really matched every song and it’s emotion really well vocally and musically, and that’s what i wanted. I would pick myself apart vocally until i realized that perfection isn’t the goal. Having a record that felt raw and real was the goal for me, and to me, we met that goal.

CMR: Women in country are starting to take a strong role once again in the genre. Who are some of your favorite country female artists that you gravitate towards, and that have some influence on you & your music?

Tae: We grew up listening to the Dixie Chicks, Shania Twain, Lee Ann Womack, etc. The thing that probably drew me to them was the fact that they weren’t being anything but themselves!

Maddie: Growing up I loved Lee Ann Womack. Her voice is angelic and she sings about real life. She knows who she is and what she stands for and I admire that most. I loved the Dixi Chicks musically and lyrically. Right now I am obsessed with Kacey Musgraves, Ashley Monroe, and Brandy Clark. I just love females that write their own music and you know it’s stories they’ve experienced and emotions they have felt. Cam is another favorite of mine!

CMR: You’ve been out on the road this summer on Dierks Bentley’s Sounds of Summer Tour. Tell us a little about that experience, and have you picked up on some key things & pointers from Dierks?

Tae: When Dierks is on stage, he’s on stage. His mind his body his voice is THERE. He is so dedicated to making sure his fans have a great time. I admire that a lot.

Maddie: Dierks is so good about connecting with the audience. He told us to not be afraid to look people in the eyes and sing to them. That’s how you connect. I love the artist he is but I love the heart the has even more. He is so humble and kind and puts his family before everything no matter how much success comes his way.

CMR: What’s it been like being the only female artists on a tour full of guys?

Tae: Dierks believed in us from day one so I’m thankful he took that chance and brought us out on tour to prove to everything that we CAN hang with the guys! The only thing we can’t do but they can is stage dive but that’s okay haha 🙂

Maddie: I think the guys were surprised that we could hang! We want to be the girls that can play ball with the guys, maybe even better than the guys 😉 We love Cannan, Kip, Dierks and we will all stay close friends even after the tour ends.

Tae: A collaboration with Vince Gill!

Maddie: I would love to sing with Lee Ann Womack and Vince Gill one day. I would probably cry because that’s been a dream since I was 5 years old.

CMR: How do you plan to celebrate the release of Start Here?

Tae: I really want to go wait in line at a random walmart or target and get it as soon as it comes out! I can’t wait to hold the physical copy 🙂

Maddie: We are having an album release party in Nashville with our team and out friends in Nashville. Hopefully there is some cake there 😉 But Tae and I are going to go out to a store the day it comes out and buy some!!!! 🙂

Be sure to pick up Maddie & Tae’s debut album, START HERE!!! It’s a must-have for your country music collection. Grab the album at a retail store near you, or on iTunes HERE.