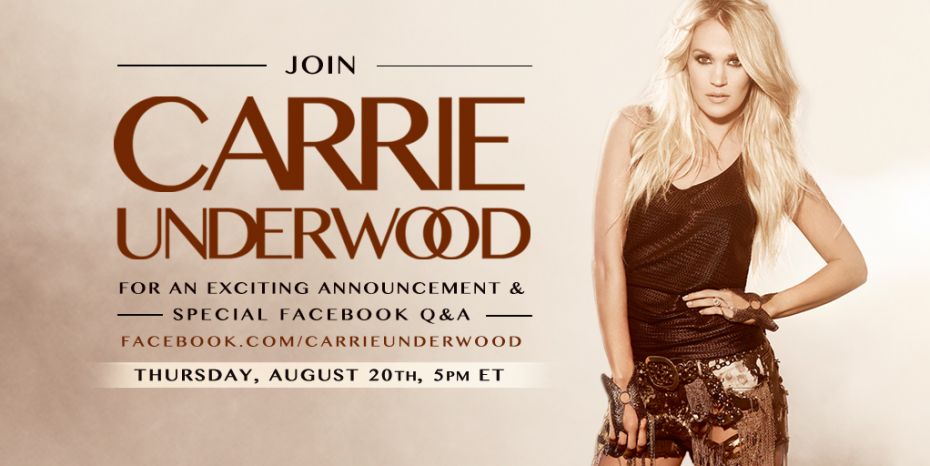 Carrie Underwood will reveal some exciting news and then take questions directly from her fans during a Facebook chat this Thursday, August 20, at 5 PM ET, on her official Facebook page, Facebook.com/CarrieUnderwood.

In addition to her Thursday Facebook chat, fans can also be watching for Underwood in a segment of the August 20 episode of the syndicated Entertainment Tonight, airing at 7:30 PM ET/PT (check local listings).

In September, Underwood will return for a third season as the musical voice of primetime television’s #1 program, Sunday Night Football.  On Friday, a 2½-minute behind-the-scenes look at the making of this year’s show open debuted in National CineMedia’s FirstLook pre-show program in AMC, Cinemark, and Regal Entertainment Group, spanning more than 19,000 movie screens.  Featuring Underwood and various NFL stars, the spot features her performance of “Waiting All Day for Sunday Night,” the opening theme for Sunday Night Football.

In addition to her Thursday Facebook announcement, Underwood has already been the focus of other recent news, earning her 21st #1 single with “Little Toy Guns,” from her album Greatest Hits: Decade #1 – the year’s best-selling hits album in any genre.  Earlier this month, Underwood’s 4.5 million in new Recording Industry Association of America (RIAA) Gold & Platinum certifications made her the current top country artist on the RIAA’s Digital Single Ranking (with certifications of 28 million across 20 songs).  Underwood was also recently announced to return with Brad Paisley for their eighth consecutive year as hosts of the CMA Awardswhen The 49th Annual CMA Awards airs live from the Bridgestone Arena in Nashville on Wednesday, November 4, on ABC.