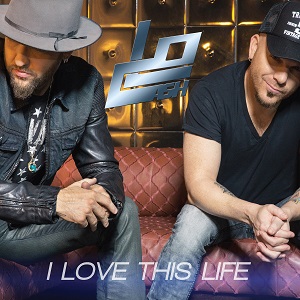 When LOCASH wrote the song “You Gonna Fly,” which became a No. 1 hit for Keith Urban in 2011, they had no idea how true those lyrics would become in 2015. The Reviver Records duo is indeed gonna fly — and they are already– as indicated this week with the No. 1 chart-topping placement of their latest single “I Love This Life,” on SiriusXM The Highway’s Hot 45 Weekend Countdown.

“This means a TON to us,” said the duo’s Chris Lucas from a LIVE telephone call Monday, July 13 with The Highway host Storme Warren. “It’s unbelievable. Our fans, they’re diehard fans, man… They’re great. We owe all of them for everything in our career and for getting us here to this point. We’ve always dreamed about getting a number one. I know our team, Reviver Records, is going nuts right now. We thank you guys,” he said.

Going from their No. 1 songwriting hit “You Gonna Fly,” straight to another smash in “Truck Yeah,” recorded by Tim McGraw in 2012, the duo proved their writing talent early in their career, and today, they’re proving their talent as performers.

“Having watched what you guys have done as journeymen,” Warren said to Lucas, “Rolling up your sleeves, never giving up, and playing anywhere you could plug your guitars and mics in to have the opportunity just to share what you guys do… You’ve gotten better and better as songwriters and as entertainers… and now it comes down to a moment like this.”

Lucas replied, “The fans keep it going, and people that believe in us, like SiriusXM… they have always believed in us. There were plenty of chances for people to give up on us, and for Preston and I to give up, but we just didn’t. We keep scrapping and clawing and we still have a long way to go, but this is a huge, huge milestone and step in our career right now.”

“So deep in our hearts, we want to thank the fans out there. You guys are the best. I don’t know anyone else better. And thanks to SiriusXM’s The Highway for giving us and all of the new artists in country music a chance,” Lucas added.

“I Love This Life” is currently No. 46 on the rolling chart, which measures airplay for the entire week. The song has received over 1.13 million streams on Spotify and has garnered a spot on Spotify’s Hot Country playlist.

LOCASH is currently out on the I Love This Life Tour presented by Kicker Audio.