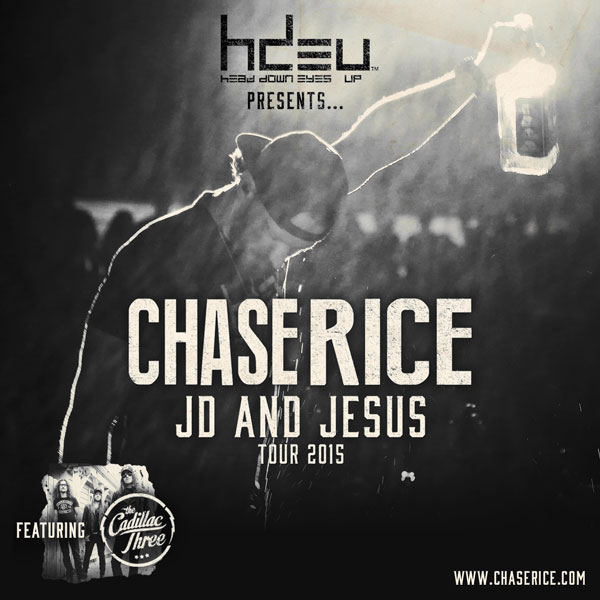 Columbia Records Nashville recording artist Chase Rice has been touring steadily for the last five years–building a strong following, city-by-city in the flyover, but this year he has sharpened his skills as a performer after watching 8-time Entertainer of the Year Kenny Chesney while on the road with him for over 40 dates on The Big Revival Tour. An experience that Rice proclaims ignited an idea to continue the momentum from the summer into the fall with his own headlining tour, JD and Jesus Tour 2015, beginning in October.

“When I was playing football in college, I learned the most about my peers –and my competitors– by studying their moves on and off the field,” shares the North Carolina native. “Inadvertently at first but now out of this drive to personally be better for our fans, I have been engaging in the same practices I did while in school: observing and performing alongside Chesney and [Eric] Church, two of my musical heroes, on stage night after night. But in doing so, I have honed my own style, and so when this tour ends, I want to make sure my fans know they need to be ready because we’re nowhere near done for the year.”

Rice has tapped The Cadillac Three as a special guest for select appearances, ensuring a raucous vibe on the tour.

Dates and on-sale information will become available later this week.

Rice will continue on the road with Chesney through the end of August while playing select solo and festival dates for the rest of the summer. For more information on tour dates, including select headlining performances, visit ChaseRice.com and follow @ChaseRiceMusic on Twitter and Facebook.com/ChaseRiceMusic.