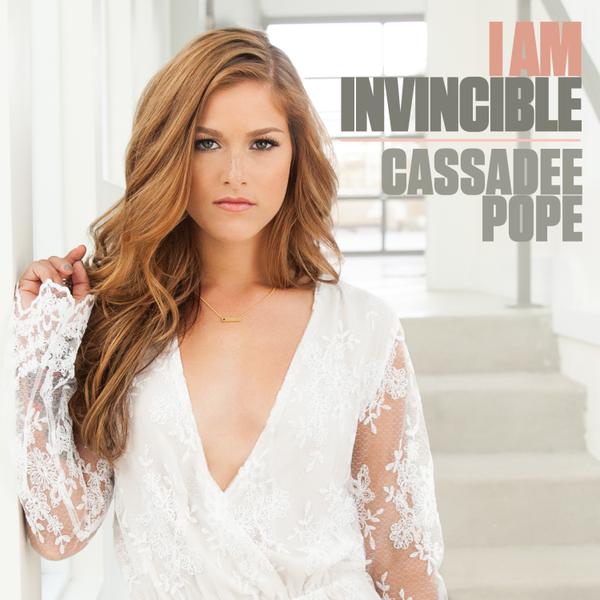 Country female vocalist Cassadee Pope makes it all look so easy: She has a vocal range that stands out among her peers. A debut single, “Wasting All These Tears,” that sold over a million copies – a feat that ranked her as one of the select few solo female artists to garner platinum certification with a first release. A chart-topping album debut with FRAME BY FRAME. Opening slots on tours with superstars Tim McGraw and Rascal Flatts. And not to mention she won the biggest show on television, The Voice.

But Cassadee’s success has not come without hardships and is the result of patience, belief in her dream and a loyal fan army.

The Florida native proves her resilience with a bold new single entitled “I Am Invincible.” The power anthem – written by Brett Boyett and Nash Overstreet and produced by Julian Raymond – declares, “I’m unbreakable, I’m unstoppable, I’m a hero, like a phoenix from the ash.”

Cassadee said the first time she heard the song it hit her right in the heart. “I was thinking of all the things I have gone through over the last few years that could have very well influenced me to step away from making music. At the same time, I was reminded of how proud I should be of myself for sticking to my true passion. I have my fans to thank for that with their encouragement, support and really cheering me on at a time of uncertainty. Thinking about all of those emotions really takes this song to another level when I’m performing it and I hope ‘I Am Invincible’ gives others their confidence too.”

“I Am Invincible” will be available on iTunes and across all digital retailers on July 24, the same day the single is shipped to Country radio stations. The official radio impact date is September 8.

After seeing Cassadee preview the song at a recent LIVE show, Rolling Stone Country said “she sings on the soaring hook, her voice buttressed by heavy power chords.”

Cassadee is now offering up a chance for fans to participate in the song’s official lyric video. Fans can register now via smarturl.it/iaminvincible to receive more details soon on how to submit their favorite lines from the “I Am Invincible.”