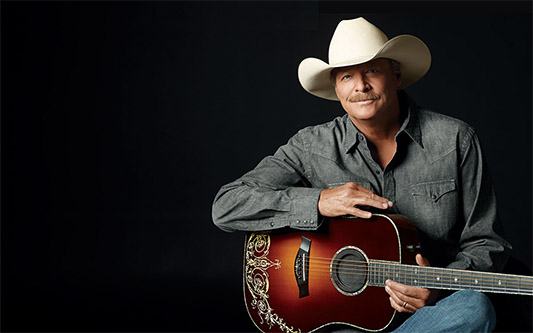 Country superstar Alan Jackson released “Jim and Jack and Hank” to country radio. The self-penned song is the first single from his upcoming new album Angels and Alcohol scheduled to hit stores and all digital retailers next week, Friday, July 17.

“It’s a fun little up-tempo tune about the same ole story,” said Jackson. “Girl leaves guy and this time he’s not going to be heartbroken. He says, ‘Just go out the door and take all your junk and everything. I don’t need anything. I got all I need. I got my friends – Jim, Jack and Hank – Jim Beam, Jack Daniels and Hank Williams, Sr. or Jr. or both.”

Jackson adds of his favorite between friends Jim and Jack, “I’ve had them all, but I’ve always kind of stood by Jack Daniels.” He wryly smiles adding, “He’s helped me through a lot of good and bad times. Helped me write a lot of songs. So he’s a good friend.”

Angels and Alcohol, Jackson’s first studio album of all new music in three years, includes seven self-penned songs including the title track. Angels and Alcohol, his 15th studio album, comes 25 years after his debut landmark album Here In The Real World. Since the release of Here In The Real World, Jackson has released 22 albums including two Christmas albums, two gospel albums, three Greatest Hits collections and a Bluegrass album which included standards and eight original songs written by Jackson.

The new album was produced by Jackson’s long-time collaborator and friend Keith Stegall who has produced every one of Jackson’s 23 albums over the past 25 years with the exception of one album – Like Red On A Rose (Alison Krauss).

Angels and Alcohol is available for preorder by clicking HERE.