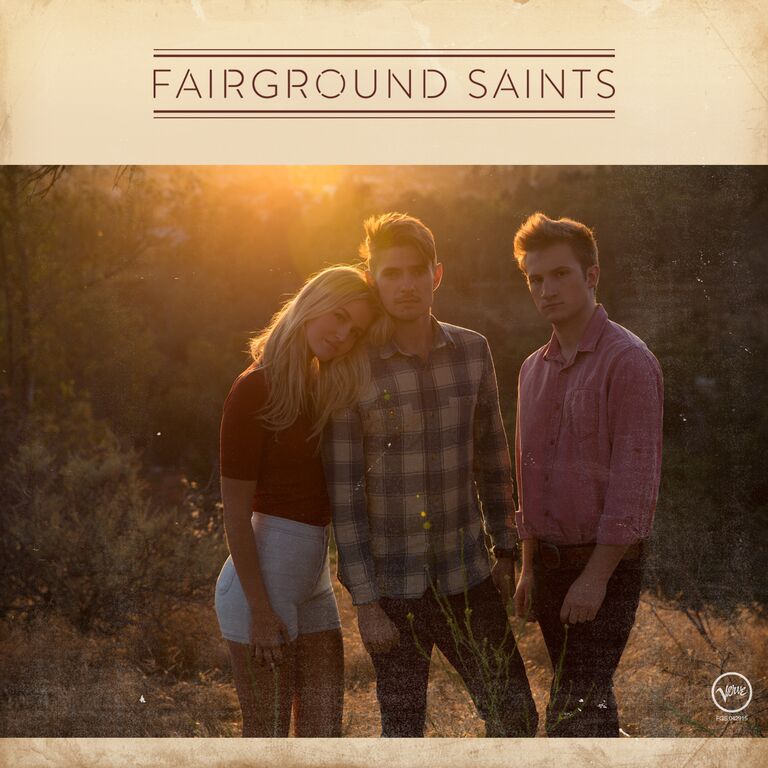 Los Angeles based trio Fairground Saints is gearing up to release their self-titled debut album on August 21.  Comprised of Mason Van Valin, Elijah Edwards and Megan McAllister, the band is set to deliver a dynamic album that will be pleasing to many music fans.

CountryMusicRocks recently caught up with Fairground Saints to chat with them about their new music. Check out what they told us about their new album ahead and much more.

CountryMusicRocks (CMR): With the upcoming releasing of your debut self-titled album, what can you tell us about this collection of music?
Fairground Saints: Eli uses the word eclectic, and that seems to be very appropriate. There’s a stylistic diversity between the songs that we are really proud of. It’s our opinion that not one of them really sounds anything too similar to the other, so there something for everyone on the record. Most of the songs are about the complex and infinite facets of love. There’s a lot of information to draw from there. We were all going through very rocky relationships at the time and I think that came through in the songs quite clearly.

CMR: For folks not yet familiar with you as a band, how would you best describe your sound?
Fairground Saints: It’s mostly aptly described as “Acoustic Soul” but that has a lot to do with the way we present the songs live. The album is definitely Americana-Pop with a lot of country elements riddled throughout the record. Pedal steel, fiddle, banjo etc. We weren’t aiming for country exactly when we made the record, we were really just trying to let a song be whatever we thought it should as opposed to putting it in a box of any specific genre. So if a song sounded like it needed to be “country-esque” to truly come to life then we ran fully in that direction while still remaining true to our own artistic visions lyrically, melodically, etc…

CMR: It’s an exciting time in your careers as you gear up to release your debut album. Reflecting back on the recording process, what is one standout moment or memory that really stands out making this album?
Fairground Saints: Definitely the first time we all sat down together and wrote ‘something from nothing’ it was a profound moment in all of us believing in each others abilities and to see that kind of instant camaraderie was pretty amazing. More specifically I was stunned by the immense proficiency of professional studio musicians like Matt Chamberlain and Sebastian Steinberg as well as Paul Bushnell, Ross Holmes and Matt Menefee. I’d never seen professionalism at that level before and I was truly humbled by it. These guys listen to a song one time and go “yea I got it” and they really do. That was astonishing to me. Really amazing working with them.-Mason

CMR: As new artists, what is one thing that you would like fans to know about you as artists and your music?
Fairground Saints: I think shying away from anyone thinking we are inaccessible is really important to us. we do our very best to remain connected with fans on a level that doesn’t personify us as “stars” or something like that. The best compliment you can receive when someone listens to your song is them, hopefully, looking at you and saying “yea, me too” cause they feel heard or understood. So our main focus is to create music that makes everybody else feel that way. If we can personify ourselves as being ultimately empathetic, then i think we will have achieved our goal as artists, songwriters, and most importantly as people.

CMR: I know you are based out of LA, but travel frequently including to Nashville. What are a few of your favorite Nashville spots to go to while you’re there?
Fairground Saints: If we lived there I know we would frequent The Basement. Based on the concentrated talent in Nashville you’re pretty much guaranteed to have your mind blows every night or of the week. We just played a gig there and really fell in love with it. But I’d definitely be frequenting Princes Hot Chicken and picking up some sweet tea with a homemade chess pie to cool down that dry rub mid meal. -Mason

CMR: What are your plans to celebrate the release of your debut album?
Fairground Saints: I hadn’t really thought about that! I think I’ve just been so focussed on making sure people are having a great time at the shows we play that its slipped my mind. I might take myself to a really nice dinner with my family. It’s a big dream come true so it deserves a celebration of some kind. Thanks for reminding me I need to celebrate that!-Mason

Fairground Saints has several reasons (12[songs] immediately come to mind) to celebrate this summer with their forthcoming debut album release. In addition, the trio has several upcoming performances scheduled. Check out their full schedule HERE.

Pre-order Fairground Saints debut album on iTunes now by clicking HERE. You’ll instantly receive three immediate downloads from the album, “Can’t Control the Weather,” “Turn This Car Around” and “Ain’t Much for Lyin.’”