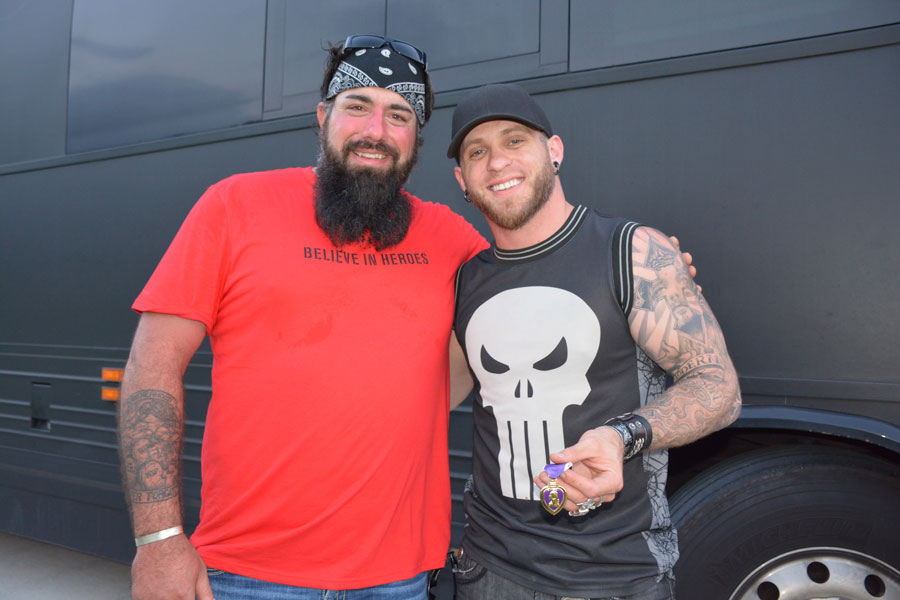 Brantley Gilbert appeared on FOX & Friends yesterday (6/7) to present Staff Sergeant Justin Patterson with two tickets to the CMT Awards. The pair met over Memorial Day Weekend when Brantley teamed up with Wounded Warrior Project for a two-day motorcycle ride celebrating the Just As I Am Platinum Edition release and launching Wounded Warrior Project’s Rolling Odyssey program. Justin gave Brantley his first Purple Heart during the ride as a symbol of gratitude for his time and attention to veterans.

A longtime military supporter, the Georgia native wanted to honor the Staff Sergeant for his service. “I’ll never be able to thank you enough for your gift when we were on the ride,” Brantley shared in the video. “It means more to me then you’ll ever know.” Watch the FOX & Friends interview here.

Brantley speaks to the Staff Sergeant every day, so it was only fitting for Justin to represent him at the awards show. The rebel-rousing hitmaker is up for Collaborative Video Of The Year (“Small Town Throwdown” ft. Justin Moore and Thomas Rhett). The CMT Awards will air live from Bridgestone Arena June 10 at 8/7c.

The “One Hell Of An Amen” singer is on the road this summer with Kenny Chesney’s THE BIG REVIVAL TOUR. For a complete list of tour dates, visit BrantleyGilbert.com.