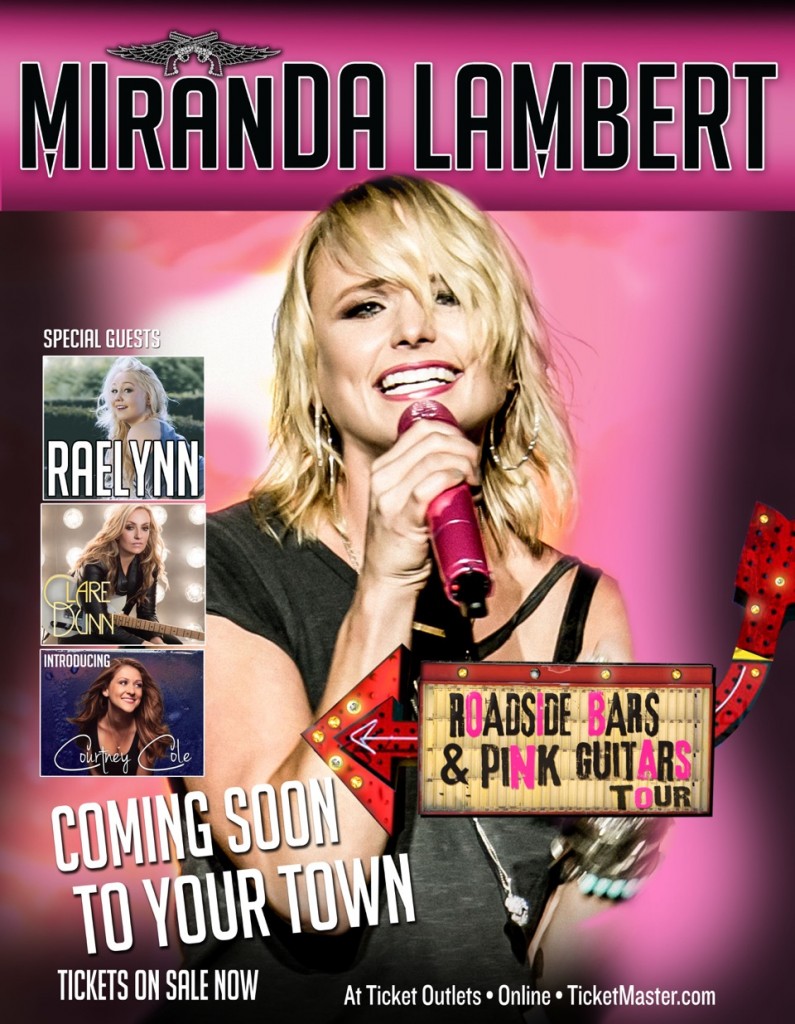 Reigning ACM and CMA Female Vocalist of the Year, Miranda Lambert, is excited to resurrect her “Roadside Bars and Pink Guitars Tour” this fall in the shape of an all women’s tour.

Miranda recently thrilled audiences across the country with her Certified Platinum Tour, including her sold-out Madison Square Garden show in New York, with Rolling Stone Magazine saying, “Lambert commanded her no-nonsense stage show with an effortless, unassuming confidence, singing fan-favorite ballads like “Over You” and “The House That Built Me” right alongside hard-partying rockers like her current single, “Little Red Wagon,” and her signature, set-closing “Gunpowder and Lead.”

She will be joined again by RaeLynn, whose gold-certified single “God Made Girls” made her a fan favorite on tour this spring. Pristine vocalist Ashley Monroe whose duet with Blake Shelton was a recent No.1 hit at Country Radio will appear again on select dates with repertoire that includes her new single, “On To Something Good”.

Miranda decided to up the ante and add a few new faces to the bill, Clare Dunn, who she recently saw perform at the Stagecoach Festival. “I hadn’t seen her before — but I’m a fan now,” Miranda said. “You don’t see that many women who get up there and really slay a guitar and play some real rock ‘n’ roll country.”

And introducing singer, songwriter Courtney Cole whose debut song “Drunk” made an impressive impact at Spotify and is now at available at iTunes. Her acoustic EP #NoFilter, a four-song collection, is currently exclusively at Spotify.

Miranda has been supportive of her fellow female artists for years and feels strongly about continuing that pattern. “I really support female artists in any genre, especially country music right now,” Lambert said. “I’ve taken girls on tour for a long time and I want to continue to do that because I feel like I can give them a platform”.