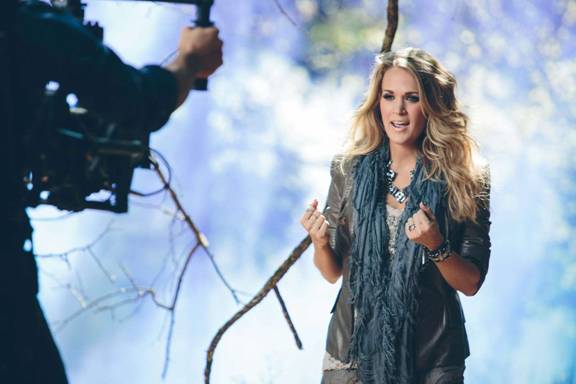 Carrie Underwood world premiered the music video for her new single, “Little Toy Guns,” exclusively on her Facebook page on Friday morning, with fans rushing en masse to see the new clip, which has now garnered more than 5 million views to date.

The music video is currently available for purchase here.

“It’s been really nice to be with Grace again,” Underwood shared.  “She’s such a talented little actress and such a sweetie.  When I was trying to think of who I wanted to see in this video, I just saw her face.”

Underwood continued, “The whole concept of the song is basically how this little girl hears her parents fighting, and it really affects her.”  Underwood credits director PR Brown with the video’s imaginative premise of an “incredible storybook theme where the little girl becomes the hero.”

Written by Underwood, Chris DeStefano, and Hillary Lindsey, “Little Toy Guns” was digitally delivered to country radio as a single on Friday for an official airplay impact date of February 17.

Also this weekend, Underwood could be seen bookending Super Bowl XLIX, as she starred in the special “Waiting All Day for a Super Bowl Fight” opening theme for the game’s broadcast.  The performance was an extension of Underwood’s role for the past two NFL seasons as the voice of Sunday Night Football’s opening theme, “Waiting All Day for Sunday Night.”

Underwood was also featured in a pre-taped clip in a post-game Sunday edition of NBC’s Tonight Show Starring Jimmy Fallon, as she joined Fallon, The Roots, and such other stars as One Direction, Ariana Grande, Usher, Sam Smith, Christina Aguilera, Blake Shelton, and more for an a cappella rendition of Queen’s classic, “We Are the Champions.”  You can see the clip here.

“Little Toy Guns” is from Underwood’s chart-topping new album, Greatest Hits: Decade #1.  Released December 9, the already-RIAA-Gold-certified collection includes 18 of her previous #1 hits, together with four songs in never-before-released versions, as well as the Billboard Hot Country Songs 7-week #1 smash, “Something in the Water.”