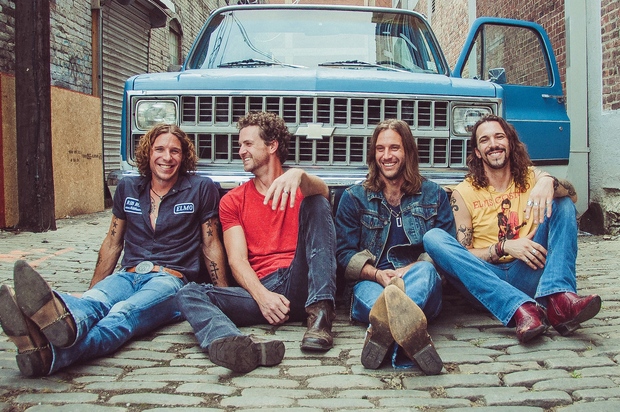 Reviver Records announces the signing of country rockers Blackjack Billy. The rabble-rousing group is Rob Blackledge, Noll Billings, Jeff Coplan and Brad Cummings who all write or co-write all their material. Over the past 18 months, the group has sold over 250,000 downloads and garnered chart-topping momentum at radio with the 2014 hit “Booze Cruise.”

They are currently in the studio working on their Reviver Music debut, scheduled for a mid-2015 release as they continue their international touring schedule. For more information, please visit BLACKJACK BILLY or REVIVER RECORDS.

Blackjack Billy comes from all corners of North America, ultimately combining their musical influences that has set them on a quick path to hit songwriting and production credits on various artists, to building their brand of rock-infused good time music that always has fists in the air and heads tipped back. “We make music that is fun, we make music that is relatable to a variety of music lovers and we enjoy doing it together,” says the high-voltage quartet.

Coplan and Billings met while both writers at EMI Publishing and created a formidable writing partnership. Coplan and Billings felt they wanted this partnership to grow into something more than writing and soon after BlackJack Billy originated. Coplan relocated here from his native Canada while working with chart-topping duo Love and Theft. Since then, he had continued to work with the successful duo as BlackJack Billy was amassing an impressive string of tour dates and ultimately signing a short-lived deal on a now defunct label. This is when Reviver Records stepped in.

“I was promoting a festival in Mississippi last year and had Blackjack Billy on the bill,” says Reviver President and CEO David Ross. “I was blown away by their command of the stage and the audience’s response and knew I would love to have them join the Reviver roster”.

Currently, the group is in the studio putting the finishing touches on their Reviver Records debut, due later this year.