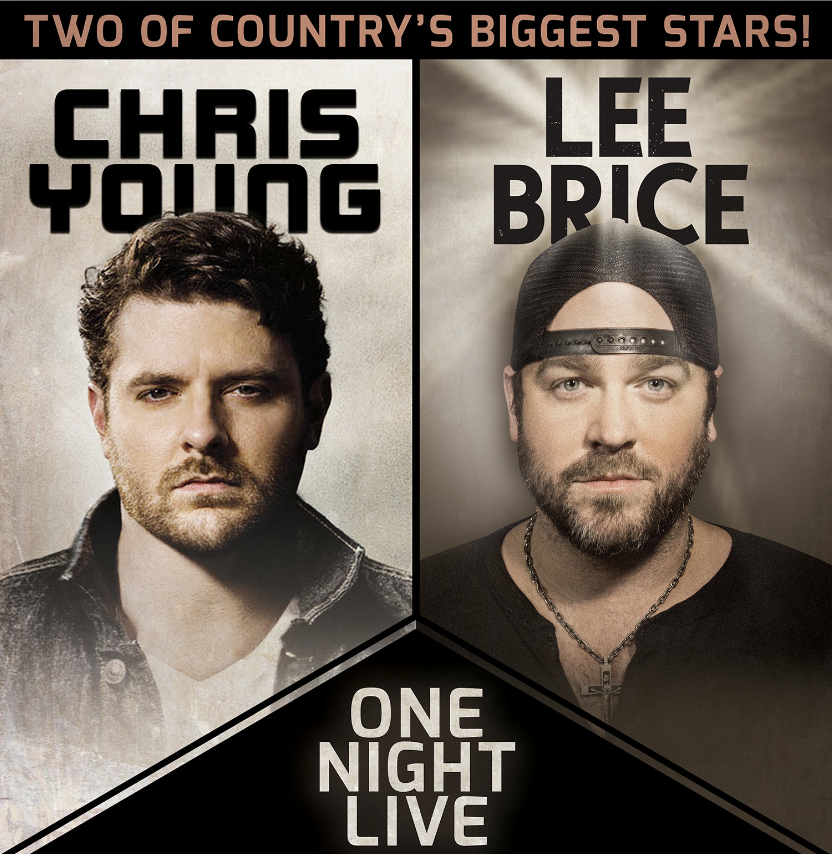 Two of country music’s most dynamic voices — Chris Young and Lee Brice — join forces to kick off 2015, bringing their unique brands of soulful, high-energy country together for a co-headlining tour beginning in Syracuse, NY at the War Memorial (at Oncenter) on Thursday, Jan. 22.

Brice — the “evocative, rough-edged singer” (New York Times) who notched a No. 1 debut for his album I Don’t Dance and was the first country artist to secure an RIAA platinum single certification with the album’s title track, also a #1 radio single, in 2014 ­— says he’s looking forward to touring with Young, “one of country music’s most reliable hitmakers” (USA Today).

Young, who has solidified his spot as one of country’s go-to artists both at radio with six No. 1 singles and on the road with numerous sold out shows, also expressed his excitement to launch this new tour.

Young’s latest hit “Lonely Eyes” was voted among Rolling Stone Country’s Top 10 songs of 2014, noting his “towering vocal performance” on the soaring ballad from A.M., his critically and commercially acclaimed fourth album. The 29-year old recently performed the song on “The Late Show with David Letterman” and debuted the track’s music video, his tenth in an illustrious career that’s delivered seven Gold/Platinum certified singles and presented him as a global ambassador for country music with shows in Ireland, United Kingdom, Australia, Norway, Sweden and beyond.

“Lee and I had a blast last year when we were out with Brad (Paisley) and so we thought it would be great to join up for a co-headlining tour for our fans this winter,” shares Young. “I can’t wait to kick things off in Syracuse later this month and head west all the way to Hawaii!”

Brice concurs, “Chris and I have been talking about touring together again for a while. We have a lot of fun together!”