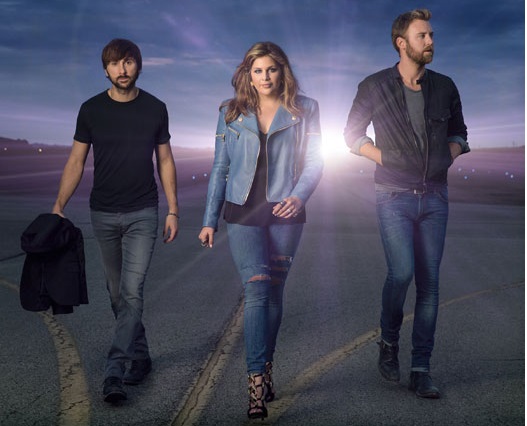 Lady Antebellum’s 2014 flight path left no town untouched over an exhilarating year that included an 80-city headlining tour, a career 9th No. One hit with the Platinum certified “Bartender,” their fifth studio album 747 which pushed toward a newer, bolder sound, and soon they’ll be closing it out with an internationally televised performance to ring in 2015 on Dick Clark’s New Year’s Rockin’ Eve with Ryan Seacrest on ABC.

“This year has been hands-down the most rewarding year of our career so far,” said Lady A’s Charles Kelley. “It seems like it was just January when we were itching to get out on the road to start testing new music. Now, for it to be December having spent a year connecting with fansaround the world, it feels like we’re more in-tune than ever.”

2014 was a year of pushing limits, taking chances and growing constantly. The trio who stayed on the move tirelessly hit the ground running, kicking off the year with their headlining North American TAKE ME DOWNTOWN TOUR, which captured the speed and spirit of the group’s unique live dynamic, with the Dallas Morning News declaring “Lady Antebellum shows off its warranted leap to superstardom.”
The stretched their boundaries with the release of the summer’s biggest breakup anthem, “Bartender,” notching their career 9th No. One hit. The PLATINUM certified multi-week chart-topper served as the lead track off their fifth studio album, 747, which reverberated the electricity of new relationships, of new music and of new ways of recording. The emotionally-charged album was met with praise from fans and critics alike for its “airtight harmonies” (New York Times) and “the group’s move away from its comfort zone is a worthy venture” (Billboard).

“747 is the album that gave us a chance to dig into what we really loved and what makes the band we are musically,” continued Dave Haywood. “By combining the core of what Lady A is while still experimenting with some new ideas, we were able to challenge ourselves to make an something we are really proud of.”

“7FOR7 was easily my favorite part of this year,” added Hillary Scott. “Taking the time to thank the fans who give us the chance to live dreams every single day is something that we can never do enough, and I’ll never forget their inspiring stories. These types of things are really the heart of Lady A and we’re looking forward to keeping the spirit of 7FOR7 going!”

Additionally, Lady A lent their voices to Nicholas Sparks’ most recent film, The Best Of Me, for which they also wrote and recorded two songs on the movie’s soundtrack. They were inducted into the Georgia Music Hall of Fame this fall, were announced as the recipients of CRS’s “2015 Artist Humanitarian Award,” Hillary Scott was honored by the Nashville Business Journal as the “2014 Artist of the Year” for their Inaugural Women in Music City Awards and the group received countless nominations including AMA’s, CMA’s, ACM’s, CMT’s, ACCA’s and Teen Choice Awards and are currently nominated and performing at the upcoming People’s Choice Awards (1/7 on CBS).

Lady A will close out the dynamic year with their first annual “Cheers For Charity” event in downtown Nashville, TN. Fans are invited for dinner, drinks and music, with all proceeds benefiting LadyAID. For more information and a full list of upcoming appearances, visit www.ladyantebellum.com.