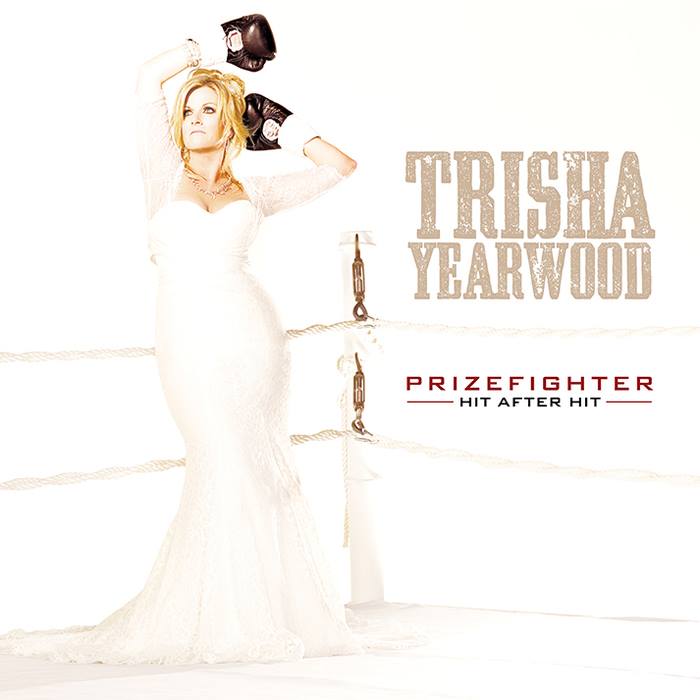 Trisha Yearwood’s twelfth studio album, PrizeFighter: Hit After Hit arrives with an upcoming schedule that lives up to the album’s name! Her appearances this week on ABC’s Good Morning America and the primetime hit show, Nashville, will air as she makes appearances at high-profile events in New York City.

After celebrating a traditional Thanksgiving (she’s cooking, of course!), Trisha will perform on The Ellen DeGeneres (12/3), co-host with her Food Network friend on The Rachel Ray Show (12/8), and she’ll be a guest and performer on The Talk (12/19). Trisha will perform at the NBC Christmas in Rockefeller Center (12/3) and pay tribute to “everyday” people doing amazing work on CNN Heroes (12/7).

PrizeFighter: Hit After Hit is available as a complete digital album now on GhostTunes. Physical copies are available everywhere albums are sold. Yearwood’s first new material in seven years includes six new songs and ten of Trisha’s career-defining hits, including “She’s in Love With the Boy,” “XXX’s and OOO’s,” and “How Do I Live.” Her new single “PrizeFighter,” ft. Kelly Clarkson packs a punch with the “never give up” attitude fitting for an album that is a complete package.

“This album was about bringing together the songs that show what I’m all about,” says Yearwood. “These are the classic songs people fell in love with and the new songs that show “what’s next.” When you come to the shows, it’s a mix of favorites with a few new ones that people are coming to hear and sing along with.”

Trisha revealed her album cover for PrizeFighter: Hit After Hit in October on her Facebook page and explained how the single came to define the album:

“The song ‘PrizeFighter’ describes for me the fight we all fight, whatever it is. It’s the courage to get up every day and give it your best shot, no matter the odds. For me, I learned that strength from my mama, Gwen. She went toe to toe with breast cancer, and though she lost her battle, she fought every step of the way with grace, dignity, humor, and love. She’s my prizefighter.

Whatever your battle, whoever your prizefighter is, my hope is that you draw strength from this important message.

As previously announced, Trisha’s glowing gown and tiara are offset by some unusual accessories – the boxing gloves she’s wearing were given to her by none other than Rocky himself! Sylvester Stallone gifted his gloves from Rocky V to Yearwood for her album cover.

As Trisha embarks on an album-release whirlwind, she’s also currently on the road. The Garth Brooks World Tour with Trisha Yearwood is a history-making tour that is shattering box office records.

PrizeFighter Track Listing:
1. PrizeFighter (featuring Kelly Clarkson)
2. Wrong Side of Memphis
3. I Remember You
4. Walkaway Joe (featuring Don Henley)
5. End of the World
6. In Another’s Eyes (duet with Garth Brooks)
7. Perfect Love
8. How Do I Live
9. Met Him in a Motel Room
10. She’s In Love With the Boy
11. Your Husband’s Cheatin’ On Us
12. Heaven, Heartache and the Power of Love
13. Georgia Rain
14. You Can’t Trust the Weatherman
15. XXX’s and OOO’s
16. The Song Remembers When