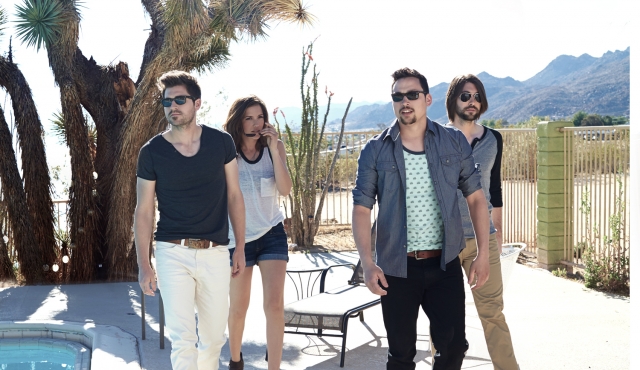 What officially began with a paper napkin contract to themselves in April of 2010 to quit their day jobs and focus solely on their music together, is merely the midpoint of the story for Warner Bros. Records’ The Railers, who are enjoying the release of their debut single, “Kinda Dig The Feeling.”

As the #1 most added new artist on the chart this week, the hard charging, multi-instrumental and vocalists have impacted country radio with a song and a sound that continues to widen and strengthen the genre.

“I feel like I was born with an instrument in my hands,” said Jonathan, (lead/vocals/guitar) who with his bandmate and brother Jordan (mandolin/fiddle/vocals), was born into a musical family where jam sessions were a regular occasion. While studying voice at North Arizona University, Cassandra (vocals/squeezebox/percussion) met Jonathan by chance at a supermarket. After relocating to Nashville, Cassandra met drummer Tyler at Belmont University and the band was born.

After quitting their day jobs in 2010, the band committed themselves to music full-time, taking gigs all across the country. They bought a 2001 blue Chevy Express they named “Geraldine” and have now logged nearly 170,000 miles. “We’re road dogs,” says Cassandra. “It’s who we are and we wouldn’t have it any other way. It’s so much fun to connect with fans and sweat and have a great time and just lose ourselves.”

Road miles alone don’t fully tell their stage story as the band spent time on a challenging Irish tour with Celtic Woman’s Orla Fallon. “We are at a place now where we know who we are and what we do, but that’s taken a few years,” said Tyler.

Even before the release of their debut single, “Kinda Dig The Feeling,” The Railers earned a spot on Rolling Stone’s “Must-See Acts'” at CMA Fest 2014 and Grammy nominated singer Hunter Hayes added them to his “Tattoo (Your Name)” Tour after seeing their performance.

They continue to visit radio across the country in support of their brand new single, with Johnny Chiang of KKBQ/Houston exclaiming, “This is, without question, the most excited I have been about a new act in years! Adding this straight into breakout rotation at KKBQ!”