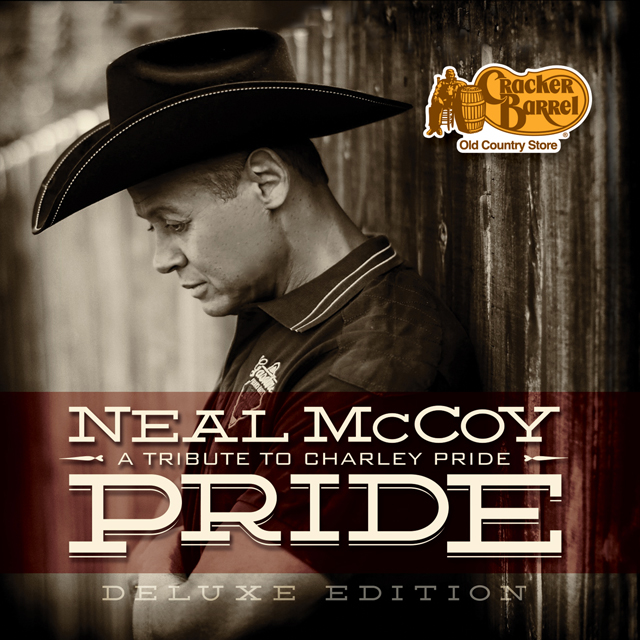 Country Artist Neal McCoy is gearing up to release the deluxe edition of his tribute album to Charley Pride on November 3.  A Tribute To Charley Pride Deluxe Edition features 13 tracks, including 2 bonus songs, and will be available exclusively at Cracker Barrel Old Country Store.

CountryMusicRocks got the opportunity to chat with Neal McCoy about his upcoming release.  We discussed his experience recording his first tribute album, as well as his time out with Blake Shelton on the Ten Times Crazier Tour.  In addition, Neal shared with us his favorite meal when he visits a Cracker Barrel Restaurant, and some country newcomers that he really enjoys listening to!

CountryMusicRocks (CMR): You are gearing up to release the deluxe edition of a tribute to Charley Pride Album. What can you tell us about this album?

Neal McCoy: I can tell you that it’s a labor of love. I love Charley Pride. He’s the one who got me started in 1981. He gave me a little foot in the door into country music, even when I didn’t even know that country music was what I wanted to sing. It came time, about a year and half – two years ago, when I needed to do an album to put out to my fans. It had been a while since I had anything out. I just thought, realistically, it’s tough for me to get played at radio so I’m going to do something that I really want to do, and that’s doing a tribute album to my hero. I researched and found that one had never been done, and I just couldn’t believe it. There is no one that deserves an album credited to them more than Charley Pride.

CMR: Going into this project, what kind of emotions did you experience since this was your first tribute album?

Neal McCoy: It was completely different because I had never done a tribute album. Emotionally I was tied to it because I wanted Charley’s approval. I got Charley’s approval to do the album, and he was flattered, but I wanted when we got done and he played it & listed to it, I wanted him to say “yeah son, that’s a good job” something pretty simple like that. I wanted to do it right and make sure he liked the recordings and like what we did with it.

CMR:  Do you have a favorite moments recording this tribute album?

Neal McCoy: Oh my gosh, just great memories! As I was singing, I was remembering back in the 80’s when I was on the road with him for 5 or 6 years opening his shows all over the country and all over the world, just having the opportunity to hear him sing night in and night out. It really just brought back some great memories of when I was first getting started, and I’ve been in it a pretty good while myself now. It was just nice to see what I could do with them [the songs]. We changed the production of them a little, made them a little more modern, maybe a little more instrumentation, but as far as singing, I wanted to sing the way he sang them. I know he has a lot of fans and has had for a long time, and I know they’ve heard them. People, when they hear a song they heard a long time ago and have heard a lot, they want to be able to sing with it. They don’t want you really screwing with the vocal part of it. So I just wanted to make sure I was true to what he had done.

CMR: Do you have a certain song on the album that you have a significant connection to?

Neal McCoy: I don’t know, that’ a good question! There’s is just great music on there. But my favorite song on there is called “Roll On Mississippi,” which I sing with Trace Adkins. I think the reason is, vocally, it’s for a baritone and I’m a baritone, and Trace likes to sing in his lower register and Charley does too. I love it from the vocal standpoint, but I also just love what the song is about. I think it’s just a great melody and it’s, for about 3 minutes, about getting away from everything and being on that river bank and watching that Mississippi river roll. Getting rid of the iPhones and TV. It talks about taking you back. It took me back to my childhood days of Tom Sawyer & Huck Finn, it refers to them in the lyrics. It’s just great stuff. I enjoyed that one, probably as much as any of them. I think they’re all pretty significant to Charley, and to me being able to be around him and hear him sing them night in and night out.

CMR: This deluxe edition is exclusively released to Cracker Barrel. Tell us a little about the two exclusive tracks on this record.

Neal McCoy: We went in and recorded the song “Why Baby Why” which is one of Charley’s favorites. George Jones wrote it in 1955 and it was George’s first single. Charley is the biggest George Jones, and was the biggest George Jones fan in the world, he loves him. Charley recorded it in, I believe in ’82. He loved it so much and made it a single of his. I just felt that I knew he would love that choice, he would love us doing that song because he loves George Jones so much. The other one is “Let Me Live,” a gospel song, which Charley won a GRAMMY for in the early 70’s. I’m a gospel fan and I know Charley is as well, and knowing it was going to be exclusive for Cracker Barrel, we just thought it would be a great addition to the album.

CMR: Speaking of the Cracker Barrel, What is one of your favorite meals to get when visiting the restaurant?

CMR: If there was one thing about this album that you wanted to convey to fans, of all generations, what would it be?

Neal McCoy: I just want to let them know, if they are of the Charley Pride generation or even of my generation which I believe it one step in front of theirs, I want them to remember the great music and the great classic country stuff that Charley had. And if they’re of a generation younger than us, I want them to understand some of the guys who paved the way for all of country music for me, the Blake Shelton era, the new kids that are coming along, and just opened up country music and made it what it is and has opened their arms to the ways things have changed now. I want them to understand who helped set up that format, and Charley was one of those guys. He was one of the main voices, and one of the main men who went through some of the tough times and got this thing launched. I want them to hopefully hear my version of Charley’s music and can say, “golly, I love what Neal’s done with it. I just love those great classics and I never understood what real country was all about.”

CMR: You recently wrapped up touring with Blake Shelton on the Ten Times Crazier Tour. How would you best sum up your experience out on this tour?

Neal McCoy: Oh my gosh, it would take forever! It just did something to me that I hadn’t had in a while. I’ve been in the business a long time, but I’ve only been on tour with Charley in the early 80’s and then I got to tour with Alabama in ’94, and then I haven’t been on a tour since then until Blake invited me out. It just made me feel good about myself and about Blake to know that he appreciates. He’s one of those guys and it’s the reason I brought him up a while ago, he’s one of those guys that understand all of music. All kinds of music, where music comes from, and why it’s able to be around. He understands the era of Charley Pride, and my era. For him to take me out and put me on that tour when there are a million other acts that would want to be on there, it’s just a big feather in my cap. I’m glad I got to be on it. He’s talked that he really enjoyed it and that maybe he wants to do it again, so I hope he does!

CMR: Who got 10 times crazier you or Blake?

Neal McCoy: Probably Blake! He’s got more energy and he’s crazier!! I can hold my own, but he’s got a little more youth on his side which always helps.

CMR: Since you have seen so many new faces enter the genre over the years, who are some country newcomers that you have been enjoying?

Neal McCoy: I’m a huge Blake Shelton Fan! Although Blake has been around for a little while now, but he just does everything right. I like Thomas Rhett. I think he’s terrific. I think he’s writing really good stuff. I got to see him a few times on stage, I think he’s a great singer and he’s got a great band. I love Lee Brice. The main thing I love about Lee is his passion. He gives you everything, which is what I’ve done all these years. I like seeing kids give the effort, and he is just so passionate about his music, and about his singing, and about his performances. I love that in folks. I’m a huge Miranda Lambert Fan. I love Carrie Underwood. I think Carrie Underwood is one of the greatest singers that we’ve had in a long, long time. There’s some young folk that are doing really good stuff out there.

Neal McCoy: The openness of it. There are still some stations that are still playing the Charley Pride’s, the Merle Haggard’s, the Willie Nelson’s, and George Jones’. Then there are some that are gearing towards our era of the 90’s. And then there are some stations that are more directed toward, and this is not a slam at all but for lack of a better description, the bro-country things that are happening. Then there are some stations that play it all. I just think that it is all within the country music realm, and it’s cool. I think it’s terrific that the young demographic is listening to some of those things, but in turn it makes you want to go hear some of the other things that they weren’t familiar with. So I just think the openness and the open arms of country music, I love where it is right now and I’m good with it.

A Tribute To Charley Pride Deluxe Edition is available exclusively at all Cracker Barrel Old Country Store Locations starting November 3.  The album can also be purchased online by clicking HERE.