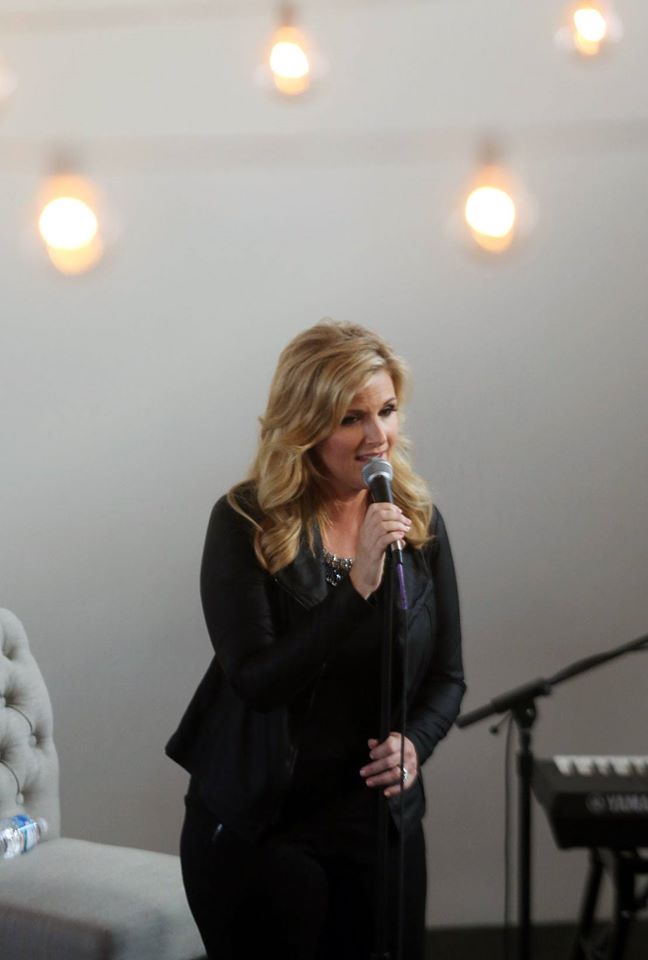 Grammy Award-winning vocalist Trisha Yearwood has signed with Sony Music Nashville and announced that her twelfth studio album will be titled PrizeFighter on RCA Nashville.

The news was shared at an last night (8/19) that gathered friends and colleagues for an evening of food and music that she performed with members of her long-time backing band, who will join her on the Garth Brooks World Tour with Trisha Yearwood when it kicks off in Chicago, IL on Sept. 4.

The event also celebrated the start of the fifth season of her Emmy®Award-winning Food Network series, Trisha’s Southern Kitchen, which will debut on Saturday, 8/23; plans for a third cookbook from the two-time New York Times Bestselling author; her own line of Precious Metals cookware (The Cookware Company makers of GreenPan), cutlery (Furi) and additional lifestyle brands to be announced; and a partnership with Hellmann’s.

“Trisha Yearwood is a tremendous recording artist who has enjoyed much success in everything she has done,” commented Doug Morris, CEO, Sony Music Entertainment. “She is a talent like no other, and I am pleased to welcome her to the Sony Music family for the next chapter of her exciting music career.”

In revealing the title of her long-awaited upcoming album, she was joined in Nashville by Sony Music Nashville chairman & CEO, Gary Overton, who added “Trisha Yearwood is one of country music’s brightest stars. Her versatility and passion have put her at the forefront of countless industries—she is a best-selling author, a culinary maven, and an-Emmy award winning television personality, but first and foremost, Trisha is an unparalleled recording artist who has sold millions of albums and is respected as one of the greatest female vocalists in country music. We’re honored to welcome her to the RCA Nashville family, and look forward to her fans hearing her highly-anticipated new music.”

Throughout five seasons on Trisha’s Southern Kitchen, Yearwood has uniquely folded musical elements and performances into her Food Network show.

“Of Trisha’s many talents, there can be no doubt,” said Bob Tuschman, General Manager and Senior Vice President, Food Network. “In Trisha’s Southern Kitchen, it is Trisha’s devotion to friends and family, her Southern hospitality and her passion for cooking that resonate so strongly with our audience. Viewers love spending time ‘in the kitchen’ with her as she cooks and entertains with her signature down-to-earth charm, playful humor and deliciously appealing warmth.”

Trisha Yearwood has pursued her life’s passions to create an authentic empire with integrity. In sharing her stories across mediums, she has faced hardships and celebrated success with grace, humor and love. Those who’ve joined her throughout this journey, no doubt, recognize the mark of a true PrizeFighter.

“I can’t even find the right words to express how excited I am to be releasing new music! I chose the title PrizeFighter because it feels like an anthem for all of us,” said Trisha Yearwood. “It’s about fighting for what you believe in, and never giving up, even when it’s hard. It’s a message we all need to hear. I’m so looking forward to working with the amazing staff at Sony. Music is what feeds my soul, and I’m grateful to them for giving me the chance to share what I love.”

· MUSIC – Trisha Yearwood’s 12th studio album, PrizeFighter, will be released by Sony Music Nashville (details to be announced). The Garth Brooks World Tour with special guest Trisha Yearwood will kick off September 4 at the Allstate Arena in Chicago, IL.

· COOKBOOKS – Trisha’s New York Times Bestselling cookbooks feature family recipes and anecdotes. Georgia Cooking in an Oklahoma Kitchen was released in 2008 and Home Cooking with Trisha Yearwood in 2010. Her third will be released in April 2015 by Clarkson Potter.

· COOKWARE & CUTLERY– Trisha’s Precious Metals cookware with The Cookware Company will be available on QVC this November and in 400 Walmart stores in the Spring of 2015. Her line of cutlery with Furi will feature two offerings, Professional (available on QVC November 2014) and Essentials (available early 2015).

· *She will appear on QVC on August 24 at 12 PM (ET) during “In the Kitchen with David” with two items from GreenPan. She’ll return to QVC on November 12 to unveil a new product line.

· PARTNERSHIPS – Trisha recently signed on as a spokesperson for Hellmann’s. Additional announcements about additional lifestyle partnerships will be made in coming months.