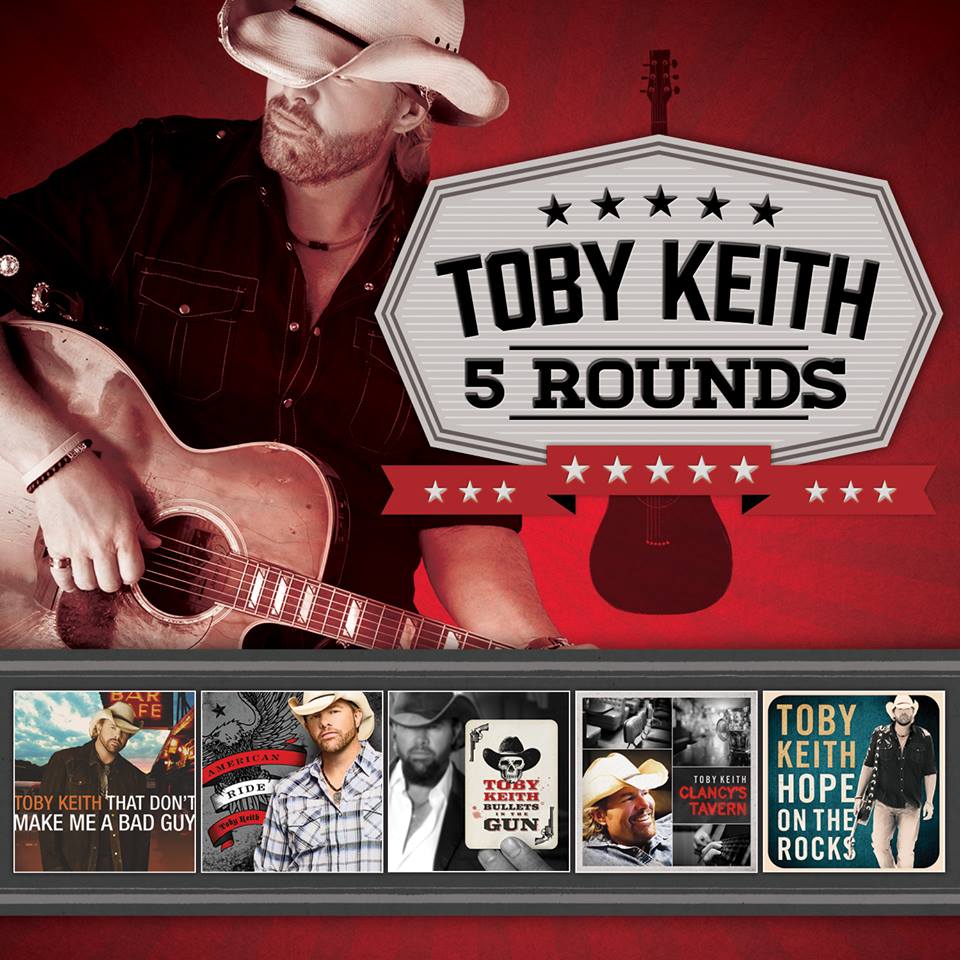 Show Dog-Universal Music will release the Toby Keith CD set 5 Rounds June 10, and the chart-topping singer, songwriter and entertainer will go a few rounds with media and fans before then. If his recent Canadian run is any indication, he might pay for a few rounds, too.

The 5 Rounds set includes the iconic Oklahoman’s album releases from 2008- 2012: That Don’t Make Me A Bad Guy, American Ride, Bullets In The Gun, Clancy’s Tavern and Hope On The Rocks. Out the week before Father’s Day, the collection will be available exclusively as a physical release featuring these classic Toby hits: “She Never Cried in Front of Me,” “God Love Her,” “American Ride,” “Bullets in the Gun,” “Beers Ago,” and “Red Solo Cup.”

In the meantime, Keith’s Country Weekly cover story bows this week (May 16) in the issue dated May 26. The Memorial Day theme includes his thoughts on the Spirit of the USO Award he received at the taping for ACM Presents: An All-Star Salute To The Troops. That show – including Toby’s performance – airs May 20 (9:00-11:00 PM, ET/PT) on CBS-TV.

Toby also tells Country Weekly about his upcoming Shut Up And Hold On Tour, presented by Ford F-Series. Launching May 25 at the Tree Town Music Festival in Forest City, IA, the trek includes support from Colt Ford and Keith’s daughter Krystal Keith. Fun is guaranteed, and the unexpected is always a possibility.

After one of Keith’s two sold-out Mile One Centre show in St. John’s, Newfoundland, he took over local bar Kelly’s Pub on the famed George Street. Toby spent two hours personally pouring beer for fans … he even picked up the tab. That may not happen at every tour stop, but adults of legal drinking age wishing for their chance to have a drink with Keith can enter the “Drinks After Work” Sweepstakes being offered by his signature Wild Shot Mezcal. Details at facebook.com/WildShotMezcal/app_143103275748075

Before Toby Keith’s rolling party starts in motion, he’s giving back with his 11th Annual Toby Keith & Friends Golf Classic on May 16 and 17. Benefitting the Toby Keith Foundation’s efforts in support of seriously ill children and their families, the event carries a tradition of great music and one-of-a-kind auction items.