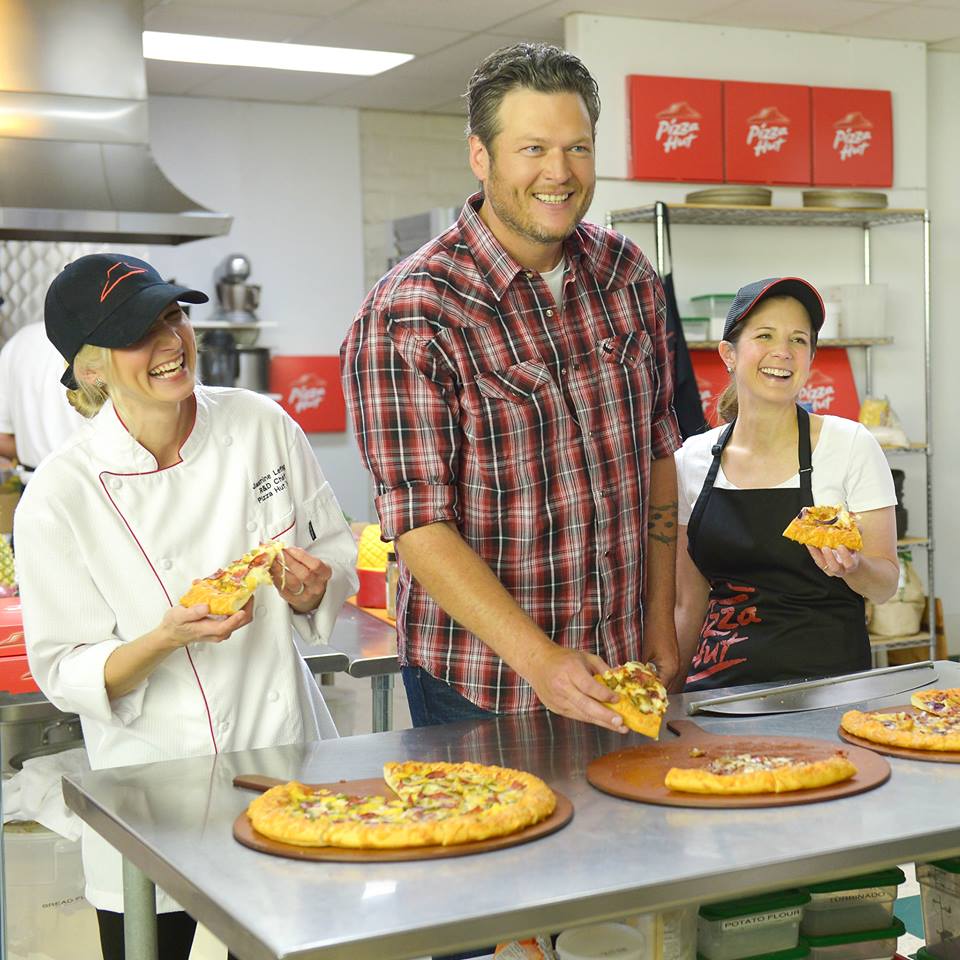 May is all about moms, grads and that itch to drive with the windows down and sunroof open blasting your favorite tunes.  Ultimately, the month serves as the launch-pad to a summer filled with enjoying outdoor activities and celebrating an iconic American tradition: barbecue.

“Growing up in Ada, Oklahoma, Pizza Hut was a big deal in my community,” said Shelton.  “As a fan of BBQ and pizza, it has been a blast to partner with Pizza Hut to bring two of my favorite foods together.”

A pizza and BBQ enthusiast, Shelton played a key role in inspiring the new menu items from Pizza Hut. So much so, the Smokehouse BBQ recipe is named in his honor. Blake’s Smokehouse BBQ and the other two BBQ recipes will be available beginning May 12 as a summer staple for $11 and consumers can enjoy a 2-liter Pepsi product for just $1 more. Also, from May 18-26, a medium BBQ recipe pizza is $5 with the purchase of any large pizza online.

“The authenticity that Blake brings as a performer, personality and backyard BBQ enthusiastic made him the ultimate fit for this launch and our brand,” said Jared Drinkwater, Senior Director of Marketing, Pizza Hut. “We’re so thrilled to have him as a partner and truly excited to bring our real backyard BBQ flavors to pizza.”

The three BBQ pizza recipes from Pizza Hut feature a savory toasted cheddar edge on the brand’s new Hand-Tossed crust and are topped with a Honey BBQ sauce. The three recipes include:

“The new line of Pizza Hut BBQ Pizzas combines the bold flavors of our cheddar crust, sweet honey BBQ sauce and hand-picked ingredients to deliver recipes that satisfy with every single bite,” said Wiley Bates III, Executive Chef at Pizza Hut. “We drew inspiration from Blake Shelton in forming recipes that are distinctive yet appealing to a variety of tastes and we think the results are really going to wow those consumers looking for adventurous flavors in their food.”

Pizza Hut and Blake Shelton fans from around the country will have their own chance to snap a portrait with the star and the BBQ pie. In select Pizza Hut restaurants and high traffic areas around the country, life-size cutouts of Blake holding his Smokehouse BBQ Pizza will be affixed for fans to capture a “Shelfie,” a Shelton inspired take on the selfie.  Fans are encouraged to share their “Shelfie” with Pizza Hut socially for potential surprise and delight giveaways, including free pizzas. More information will be available through the Pizza Hut twitter account. The cutouts will appear in select Pizza Hut restaurants, as well as Blake’s hometown of Ada, Okla., plus Los Angeles, Las Vegas, Nashville and other notable locations across the country.

Additionally, fans can get an early taste of the BBQ Pizza recipes on May 15-18 in Gulf Shores, Ala. where Pizza Hut will be dishing out slices at Hangout Fest. The brand will be celebrating up and coming music talent as part of the Pizza Hut and Viacom Music Group (MTV, VH1 and CMT) Discover Great program.

The new Pizza Hut BBQ pizzas follow the introduction of a line of Garlic Parmesan pizzas, which include Roasted Veggie, Five Cheese Please and Chicken Bacon Tomato recipes. The brand retains a long list of “Lover’s” pizzas, including Meat Lover’s® and Veggie Lover’s®.

To order from Pizza Hut, visit PizzaHut.com, which was recently redesigned to enable faster and more intuitive ordering than ever before. Pizza Hut has the largest suite of ordering channels, including apps for iPhone, Windows and Android, as well as Xbox 360, iPad and a mobile site.