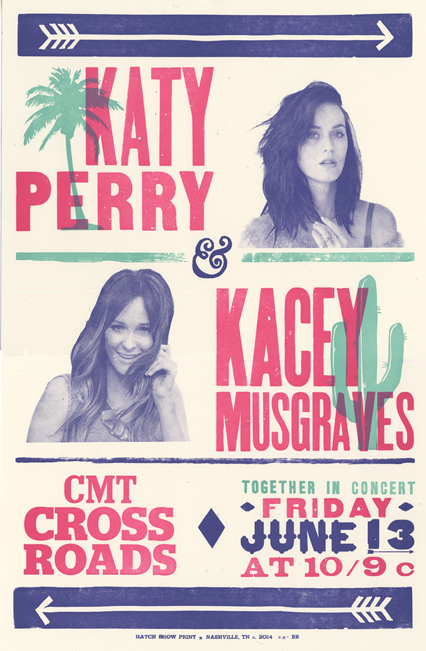 For more than a decade, CMT has been pairing together country and non-country artists for episodes of the flagship music series CMT CROSSROADS, which has delivered some of the most unforgettable performances on television. Next up are global superstar Katy Perry and recent Grammy-winner Kacey Musgraves, who will appear in the 50th episode of the critically acclaimed and longest-running music series of the network, it was announced today at CMT’s Upfront presentation.

For the first time in the series history, this all-new episode of CROSSROADS will not only air on CMT, but it will also air on multiple channels including VH1, MTV, MTV Hits and Palladia. The two stars will swap lyrics and share stories in a performance to be taped live in Los Angeles, before embarking on a tour together later this summer. CMT CROSSROADS: KATY PERRY AND KACEY MUSGRAVES will premiere on Friday, June 13 at 10 p.m. ET/PT on CMT. Air dates for the VH1, MTV, MTV Hits and Palladia airings will soon be announced.

“This is without a doubt one of the best pairings in the 50 episode history of the Crossroads franchise,” says John Hamlin, senior vice president music events and talent, CMT.   “Both Katy and Kacey are killing it right now in their respective formats—due in large part because their music is built on authenticity and great song writing.  Those songs reflect a 2014 view of the world as seen from two different points of view.  Better yet, they are good friends who are very, very excited to get on stage and share their music with one another.”

“From the moment I heard ‘Merry Go Round’ by Kacey Musgraves, I knew we were cut from the same songwriter’s cloth,” said Perry. “I have been a fan and a friend of hers from the beginning, always championing her prolific songs every opportunity I get. To me, Kacey Musgraves is an artist that should be a household name because she offers a unique perspective with her writing style.  It’s going to be a BLAST to play on each other’s songs this ‘Crossroads.’ It will be a preview to our Prismatic World Tour road trip this summer, WHICH I CAN’T WAIT FOR!”

“I’ve been such a HUGE fan of Katy and her vision since I found out about her. And since she’s found out about me, she’s been an amazing light and friend to me. So, joining forces with her for ‘Crossroads’ is going to be incredible,” exclaimed Musgraves.  “In some ways we’re on opposite ends of the spectrum, but in a lot of ways our music makes total sense together. Her songs, while having grit, are so fun and it’ll be a cool challenge to throw a little country on ’em. I love her brain and her heart and I can’t wait for our two musical worlds to collide!”