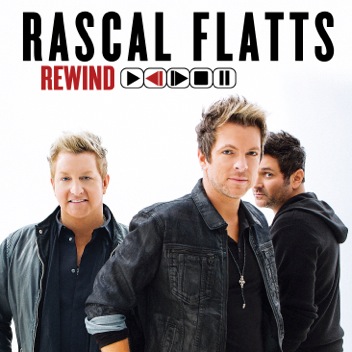 Superstar group Rascal Flatts (Gary LeVox, Jay DeMarcus and Joe Don Rooney) revealed today the official tracklisting for REWIND, their forthcoming album slated for release May 13 on Big Machine Records. The title track has already catapulted into the Top 10 at Country radio and garnered over 1.2 million views on VEVO with the accompanying video. Fans can pre-order the project now via RascalFlatts.com.

Spearheaded by Jay DeMarcus, members of Rascal Flatts co-produced more than half of the album with acclaimed producers Howard Benson and Dann Huff contributing to several of the 13 standard and four deluxe tracks for a Target exclusive. The extended version includes “Compass,” which will be featured on April 16 in the Sony Pictures film “Heaven Is For Real,” based on the #1 New York Times best-selling book of the same name.

REWIND follows their seven consecutive studio albums, which debuted at #1 on the Billboard Country Albums chart and distinguished Rascal Flatts as one of only four acts during the SoundScan era to earn the achievement. The best-selling Country vocal group of the past decade has sold 22.5 million albums and over 28 million digital downloads since their musical debut in 2000, and has notched 14 #1 singles.

Leading up to their REWIND Tour 2014 this May, Rascal Flatts will headline “Outnumber Hunger Live!” during the ACM Party For A Cause Festival on April 4. Now in its third year, Outnumber Hunger is an initiative from General Mills, Big Machine Label Group and Feeding America that helps fight hunger in local communities. To date, Outnumber Hunger has helped secure more than 25 million meals for Feeding America’s network of local food banks.