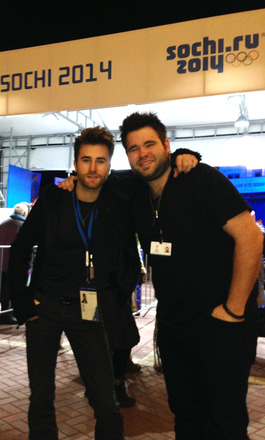 Arista Nashville recording duo and NBC The Voice Season 4 finalists The Swon Brothers are at the Olympics, and they will be the only U.S. band to perform as part of NBC’s Today show Olympic coverage from Sochi when they perform their debut single, “Later On,” on Today this Friday, Valentine’s Day, February 14. Now, the brothers are also going the extra mile to share the fun of their world travels on the newly launched, Swon-styled website, www.AroundTheSworld.com.

By visiting the site and connecting with the duo on Facebook or email, fans will be able to travel along with Zach and Colton’s experiences via a page featuring videos of their adventures, along with a countdown timer between new video airings.  Participating fans will also have the opportunity to win a trip to Las Vegas to have dinner with The Swon Brothers and also attend the 49th Annual Academy of Country Music Awards on April 6.  Following Sochi, upcoming video excursions will find the brothers on a Caribbean cruise and joining headliner Jerrod Niemann in Mexico for the High Noon Adventure at the all-new Hard Rock Hotel Riviera Maya.

About the excitement surrounding The Swon Brothers, Gary Overton, Chairman and CEO of the duo’s record label home, Sony Music Nashville, remarked, “It’s a testament to the level of talent and personality that Zach and Colton bring to the table that extraordinary opportunities like Sochi and Today are a reality for them, even before their debut single, ‘Later On,’ officially hits the airwaves.  The early response has been tremendous, and fans are really going to appreciate how much the Swons want to connect and share this career journey, and the AroundTheSworld website is one more terrific way to make that happen.”

Between travels, The Swon Brothers are at work on their Arista Nashville debut album, helmed by multi-million-selling producer Mark Bright (Carrie Underwood, Sara Evans).  Featuring “Later On,” the album is set for release later this year.

“Later On” is already drawing critical acclaim, with MusicRow’s Robert K. Oermann cheering, “I loved these guys when they competed on The Voice and was delighted when they got a recording contract.  Their debut single is a sunny salute to an alluring babe that has a deliciously addictive chorus.  Bopping and promising in the extreme.”

“Later On” is currently available for sale here, with an official country radio airplay impact date of March 3.