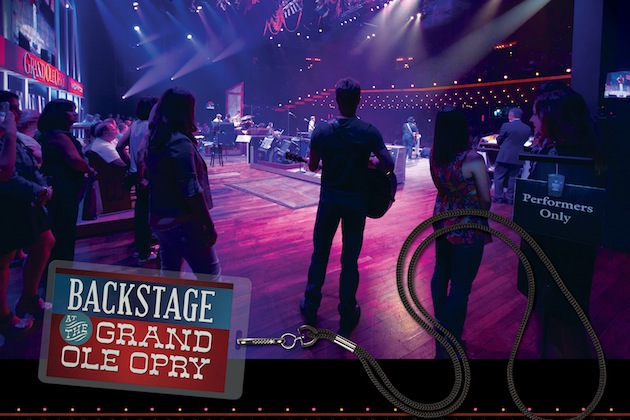 Throughout the book, some of country music’s most popular stars share their stories from backstage, colorfully illustrated by more than 250 exclusive photos. The book is co-authored by Brenda Colladay and Dan Rogers, who together have over thirty years of experience working behind the scenes at the Opry. Photos include dozens contributed by long-time Opry photographer Chris Hollo as well as vintage shots mined from the show’s large archive.

As Opry member Garth Brooks says in the book’s pages: “No offense at all to the people sitting in the seats, but the real show is backstage. That’s the Opry.” The story of Brooks’ nerve-rattling first night at the Opry is shared in the book as well as tales of Carrie Underwood’s improbable first encounter with the legendary Loretta Lynn and Vince Gill’s treasured time spent backstage with Opry patriarch Roy Acuff.

Opry member Dierks Bentley can be seen on the book’s cover standing backstage in the moments before a performance. “This book tells the story of one of my favorite places—backstage at the Opry—like never before,” Bentley said. “The Opry and its fans deserve this.”

BACKSTAGE at the Grand Ole Opry will be available at opry.com as well as all Opry Nashville retail locations.