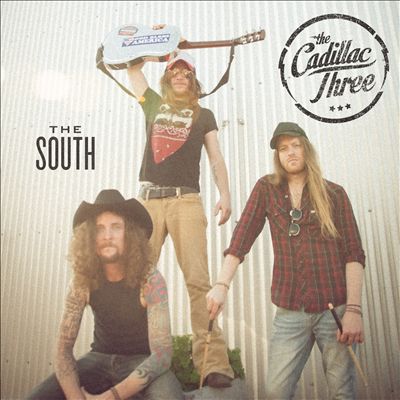 The Music City born-and-bred boys boldly sing, “this is where I was born and this is where I’ll die,” in their gritty debut single “The South,” featuring Florida Georgia Line, Dierks Bentley and Mike Eli (Eli Young Band). Watch the music video here.

“I remembered the first time I heard ‘Sweet Home Alabama,’ and I was just mesmerized with it. I thought we needed something that would resonate with people the way ‘Sweet Home Alabama’ did for me as a kid,” said lead singer Jaren who penned “The South,” which sold over 10,000 downloads in the first week.

The high-energy trio is already building buzz with their unique musical tones, raw lyrics and eccentric styling. The Cadillac Three scored a spot on CMT’s ten new artists to discover list saying, “[the] shaggy-haired three-piece band have already made tons of friends in country music, as you can see in their video for their loud-and-proud single, ’The South.’” A recent Billboard.com profile gives more of an introduction to the talented trio and states, “there’s an exciting new sound on the airwaves of country radio – The Cadillac Three.”

“We call our sound ‘country fuzz.’ It’s the best of both of those worlds – a little lap steel, some raunchy, Southern vocals and story songwriting with big drums. Really, a combination of what we all grew up listening to – Bocephus and Skynyrd – infused with some of what’s going on today – a little Eric [Church] and Dierks [Bentley]. Being born and raised here, we’re just excited to do something a little different for Nashville,” continued Jaren. He has also penned hits for Tim McGraw (“Southern Girl”), Keith Urban (“You Gonna Fly”) as well as several others for Kenny Chesney, Jake Owen and Dierks Bentley.

While spending time the last several months visiting radio stations across the country, The Cadillac Three is set to tour Europe with Eric Church this Spring and return stateside to join Jake Owen on his DAYS OF GOLD TOUR, beginning March 20. On April 4, they will perform in Las Vegas during the ACM PARTY FOR A CA– USE Festival alongside labelmates Rascal Flatts and Thomas Rhett, benefitting Outnumber Hunger to help secure meals at local food banks for the 1 in 6 Americans across the nation who struggle.

In addition to their live performances, The Cadillac Three marked their second appearance on ABC’s hit drama “NASHVILLE,” showcasing “The South” for Rayna James (Connie Britton).

For tour dates and the latest updates, visit The Cadillac Three.