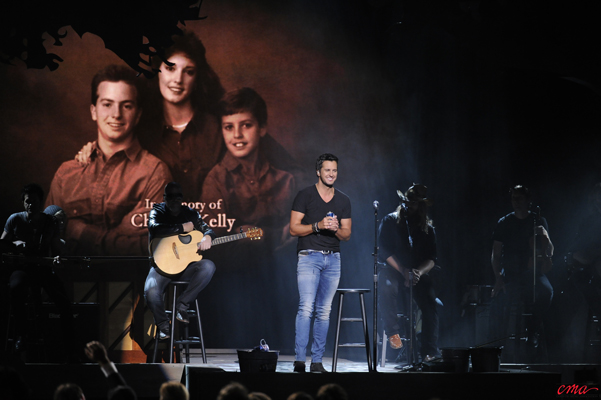 Reigning ACM Entertainer of the Year Luke Bryan takes the top spot on the Country Aircheck/Mediabase chart and spends a second week at the top of the Billboard country chart with “Drink A Beer,” marking his ninth career No. 1 single.

The song, written by Chris Stapleton and Jim Beavers, has spent the last 11 weeks as a Top 5 download on Nielsen’s Country Digital Song chart, five of which were spent at No. 1. The multi-week chart topper is the third consecutive No. 1 single from Luke’s Crash My Party album which was certified Platinum in just six weeks.

Crash My Party debuted at No. 1 on both the Billboard 200 and Country sales charts with 527,783 units sold, making it the biggest sales debut for a Country male artist since 2004.

Luke’s “That’s My Kind of Night Tour,” which has sold out all dates on its first leg this year, will also include his first-ever headline stadium shows this summer- June 21 in Pittsburgh, Penn. at Heinz Field,  Lincoln Financial Field on August 15 in Philadelphia, Penn. and on August 31 in Chicago, Ill. at Soldier Field.

Luke currently has three ACM Award nominations, Entertainer of the Year, Male Vocalist and Album of the Year for Crash My Party.  Luke will co-host the 49th Annual Academy of Country Music Awards with Blake Shelton on Sunday, April 6th at 8pm live ET/delayed PT on the CBS Television Network.