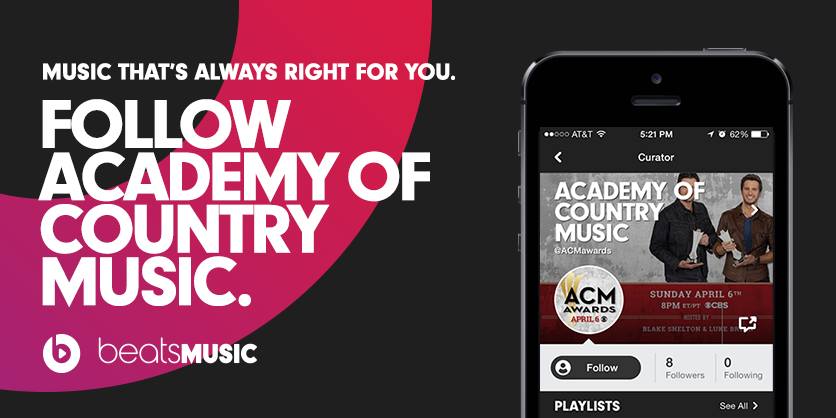 The Academy of Country Music has partnered with Beats Music as a curator partner for the new music streaming subscription service, which officially launches TODAY, January 21, 2014.

As one of only three designated country music curator partners, the Academy of Country Music joins 30 of the most respected brands in the world to create playlists of editorialized music, including esteemed brands such as Ellen DeGeneres, Target, the Grand Ole Opry, Country Weekly, Rolling Stone, and many more.

ACM playlists on Beats Music can be accessed at http://beats.mu/gdh.

Beats Music features a vast catalog of more than 20 million fully licensed songs from all the major labels managed and maintained by a team of music experts with hundreds of years of curatorial expertise.  At launch, all music fans are invited to a free trial of Beats Music, after which a $9.99/month subscription fee will apply.  The service will be available on iOS, Android and Windows Phone as well as via the web beginning January 21st. Fans can stream their music or download to listen offline.

For more about Beats Music, please visit the company site at www.beatsmusic.com.

For more about the Academy of Country Music, please visit www.ACMcountry.com.