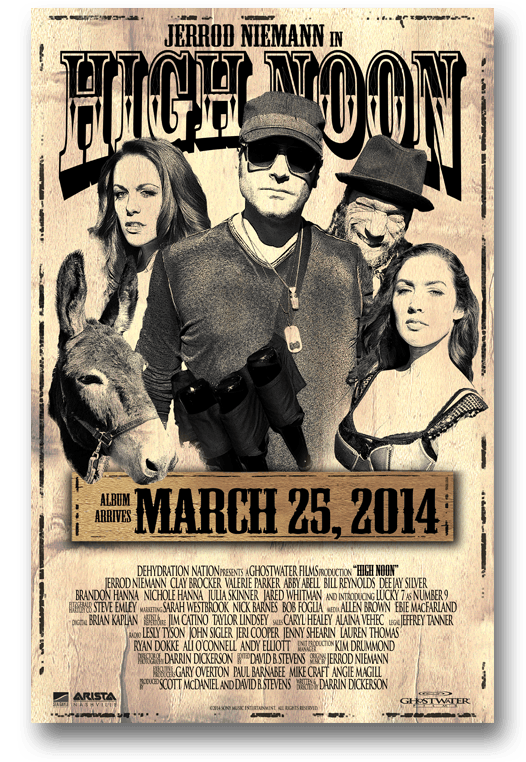 Sea Gayle Records/Arista Nashville recording artist Jerrod Niemann has announced the release of his new album, High Noon, due to arrive March 25. Produced by Jimmie Lee Sloas and Niemann, the collection is previewed by the good-time energy of the Top-20-and-climbing debut single, “Drink to That All Night.”

In conjunction with the album announcement, a special High Noon themed “movie poster” was revealed this morning on Niemann’s social media, inviting fans to connect at www.JourneyToHighNoon.com to join the fun leading up to the album release. Fans can look forward to upcoming opportunities for free downloads, gaming, and exclusive video content to be released within a unique digital interactive experience.

As for his choice of album title, while “high noon” has multiple definitions – including a period of peak creativity – Niemann says that he opted for the title for a more playful reason.

“High Noon is a term that’s been in my mind since I was a kid. Growin’ up in Southwest Kansas, I actually lived in Dodge City, Kansas, where the old gunfighting days have such a historical value. I mean, Wyatt Earp is the main street, and high noon, if you think of it, it’s always meeting your adversary at noon, and goin’ out there, walkin’ a few steps, and turn around and face what you’re most afraid of, right then and there. So for me, every time any of us make a journey in our life for whatever we’re tryin’ to do–in this case makin’ music–I just think, ‘okay, my adversaries are party poopers, and I’m about to face that so that all of us can have a great time,’ hopefully, listening to this record.”

This week, High Noon’s debut single, “Drink to That All Night,” charts at #19 and #20 respectively on the Country Aircheck and Billboard country airplay charts.

MusicRow magazine’s Robert Oermann raves, “This man continues to make some of the most imaginative sounding country music of our day. On this party rocker, he mixes straightforward chorus singing with processed vocals on the verses and a densely produced, layered electro track. I remain a fan, and my hat’s off for audio innovation.”

“Drink to That All Night” is currently available for sale here.