Using pure intuition and heart, while following a bold beat that is all her own, Black River Entertainment’s KELSEA BALLERINI is beginning her next chapter on opening night of THE UNAPOLOGETICALLY TOUR next Thursday (2/8) at the Alabama Theatre in Birmingham, AL.

Taking her critically acclaimed sophomore album UNAPOLOGETICALLY to the next level, Ballerini will deliver her intimate sonic diary of loss, life, and love, onstage each night from start to finish, just as the thematic 12-track collection was personally handcrafted. From being buried in an all-consuming heartbreak from the depths of “six feet down” in “Graveyard,” to learning to thrive and embrace the uncertain “In Between,” and ultimately not only discovering herself but true love in the “tragic and epic and so amazing” journey of “Legends,” the chronological tale of Ballerini’s whirlwind world will be personified live in three high-caliber parts while incorporating a visually-immersive experience for fans.

“I’ve never performed an entire album during a show before, but it was the only way to truly open my heart to loss, life, and love,” admits Ballerini. “This new album and tour is every little piece of me, unapologetically, and I am so ready to embrace all the messy and beautiful, plus relive the hits with you.”

As her Top 5-and-rising lead single “Legends” continues to charge charts, Ballerini has shared her summer-fall venture as part of KEITH URBAN’s GRAFFITI U WORLD TOUR kicking off June 15 at Hollywood Casino Amphitheatre in St. Louis, MO, through November 3 at American Airlines Center in Dallas, TX. Recently offering fans a taste of what’s to come during a surprise pop-up show at Nashville’s club Exit/In on January 17, Urban and Ballerini jumped genre lines with a cover of CAMILA CABELLO’s sultry single “Never Be the Same” (CAMILA), to which the pop star hailed on Twitter: “OH MY GOD!!!! @KeithUrban AND @KelseaBallerini THIS. IS. MAGICAL. #NeverBeTheSame.” 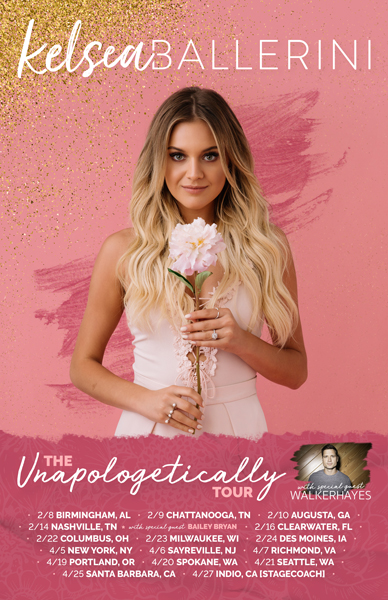