On November 17th, fans of Carrie Underwood will get what they’ve been asking for, to experience her highly successful Storyteller Tour – Stories in the Round again, with the digital release of the live concert filmed at her sold-out Madison Square Garden show. 2016’s top touring country female of the year took her critically-acclaimed world tour across nine countries, playing more than 100 shows for over one million fans.

Carrie Underwood: The Storyteller Tour – Stories In The Round, Live from Madison Square Garden will be available digitally on iTunes, Amazon, Google Play, and Qello.

“We had the best time on ‘The Storyteller Tour’ performing for the fans last year,” said the reigning CMA Female Vocalist of the Year. “The amazing production and 360-degree stage let me get closer to them than ever before. I saw so many of their social media posts asking for a release of the show and we knew we had to do it. I’m so happy to get this out and relive the most fun I’ve ever had on tour!”

“The Storyteller Tour – Stories in the Round” received rave reviews for its massive in-the-round 360-degree stage production as well as Carrie’s command of it.

“…the in-the-round setting provides each concert goer with the best experience possible. Simpler still is the storytelling aspect of the show and country music’s reliance on conveying memorable stories in song.”- RollingStoneCountry.com

“The most stunning part of the production however, remains Underwood’s voice, strong and nuanced.” – The Boston Globe

“Lasers and swaying spotlights and fireworks and explosions all added to the spectacle. But make no mistake, Underwood was the star of the show.” – Florida Times-Union

“…one of the strongest and most engaging performers in today’s music.” – Pittsburgh Tribune

“Carrie has developed a fantastic stage show … that manages to be both visually dazzling and intimate at the same time.”- Country music historian Bob Oermann

“Up-tempo or ballad, Underwood makes sure that every song has its moment – and it’s clear that now is hers.” – The Tennessean

The tour travelled over 50,000 miles among 18 trucks and 8 buses across North America. Each show consisted of 112 automation cues controlling all elements of the 150 foot-long in-the-round stage including 7 stage elevators, 3 rings of video screen, a revolving central stage, and mirror ball, through 56 axes of motion. The tour used over 51,000 pounds of carbon dioxide, and dropped over 400 pounds of Mylar. Carrie’s wardrobe, created by Emmy-winning costume designer Marina Toybina, consisted of 32 custom made costumes and 214 pieces of jewelry, allowing for different outfit combinations across the show’s 5 Acts in each city. The tour’s Creative Director was Barry Lather (Rihanna, Mariah Carey, Usher, Michael Jackson) and Butch Allen (Metallica, The Eagles, Eric Church, No Doubt) was the Production & Lighting Designer. 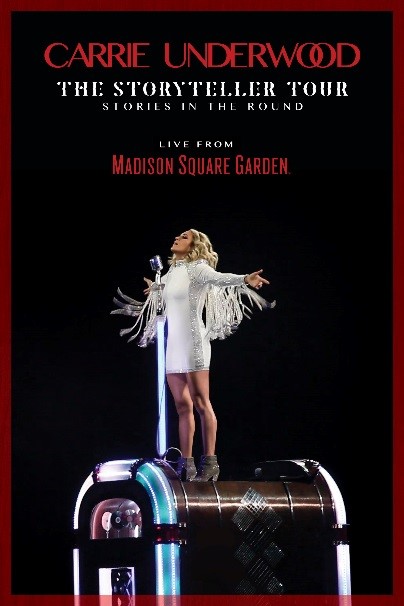