Ana Cristina Cash provides extensive details on each track featured on The Tough Love EP. See what Cash told us about this project and much more in our exclusive interview with the talented singer/songwriter.

Country Music Rocks (CMR): You are gearing up to release your new project, The Tough Love EP. Tell us a little about this. What can fans expect with this collection of music?
Ana Cristina Cash: The Tough Love E.P. is a carefully selected group of 6 songs that promote the message of empowerment. All of the tracks on the E.P. are a combination of gritty Blues, Americana, Country, Rockabilly and American Roots. I recorded all of it at the Cash Cabin Studio in Hendersonville, TN and it was produced by my husband John Carter Cash. The single, “Tough Love Woman”, which I co-wrote with Shawn Camp, has a fun retro sixties vibe and features a great horn section. It is a song that is about self-love and not settling for less than what you deserve in a relationship.

The song “Southern Roots”, written by John Carter and I is a swampy dark murder ballad. It is story song about a married woman is violently abused at home by her husband. In the song, she has reached her breaking point and decides to take the fate of her abuser in her own hands.

“The Cost Of Love”, written by Bill Miller and myself tells the listener that you have to be willing to know the price for love and that you have to actually put the right effort in to make a relationship work. It’s very bluesy and features some cool Moog riffs on it played by Joseph Cash.

“Busted”, which was a co-write between me and Jodi Marr is a funky story song about two kids that are living in the dust bowl and playing in bars every week. It is about a couple. The male is a piano player and the girl is a singer. They have dreams about saving up money and moving to Hollywood together to pursue their dreams and make it to the big time. This song also features a horn section.

I chose to also record a different version of John Anderson’s “Seminole Wind” because it is a song that I can really relate to, being a native of South Florida. The song has a haunting country ballad vibe with prominent steel guitar, mandolin, fiddle and the Native American flute.

The last song on The Tough Love E.P. , “Move Along Baby”, is a fun new rockabilly style song that I wrote with my husband John Carter Cash .

CMR: You included John Anderson’s Seminole Wind on the album. What is it about this specific song that made you want to include it on The Tough Love EP?
Ana Cristina Cash: I chose to record my own distinct version of John Anderson’s classic song “Seminole Wind” because I feel a deep connection to the lyrics and the music in the song .I grew up in South Florida and have often visited Seminole territory. John Anderson’s lyrics are very prolific and tell a very important story about the plight of the Native American people. The melody is so haunting and I feel a very special and close connection to it.

CMR: You worked closely with your husband, John Carter Cash, on this project as he co-wrote two of the tracks with you and produced the project. What was it like being able to work with him on this project that is so special to you and what advice has he given to you throughout this process that you’ve applied to your career?
Ana Cristina Cash:It was a wonderful experience to work with my husband John Carter Cash on The Tough Love E.P. He was my producer on this project and co-wrote two songs on the E.P. with me, “Southern Roots” and “Move Along Baby”. Being a Grammy Award winning producer who has worked so hard on several projects throughout many years, he brought his extensive production knowledge to the table . One of the best pieces of advice I’ve learned from him on this project is to make sure that all of the songs were cohesive with each other.

CMR: As you head out on the road to showcase your new music, how would you best describe your set?
Ana Cristina Cash: My set is pretty eclectic . All of these songs are a fusion between Blues, Soul, Country and Americana. There are an equal amount of uptempo songs just as there are ballads. I try to make the live show experience fun for my audience.

CMR: As fans continue to get to know you, what is one thing you would like to convey to fans about you and your music?
Ana Cristina Cash: As fans get to know me and my music, I would like them to take a journey with me. I write songs in a way that I want my audience to relate to it and interpret it for themselves . Although I of course take special care in the music and melodies that I create, I put special emphasis and focus on the lyrics. As a kid, I loved to write and read poetry. This is something that I still love to do. I’ve had a life long love affair with words.

CMR: With 2017 well underway, what are some things you have going on that you are really looking forward to this year?
Ana Cristina Cash: This year I am really looking forward to doing more shows in support of the Tough Love E.P. and also finishing the full length album which we are looking to release later this year. I am also working on putting the finishing touches of a Christmas album.

CMR: Country Music is a genre that significantly stands out on its own. What is one thing about country music that really resonates with you?
Ana Cristina Cash: The one thing that resonates with me that I love about Country music is the honesty and the stories they tell in their songs. I also love the outstanding vocals of so many Country music artists.

The Tough Love EP is available now. Download yours on iTunes here. 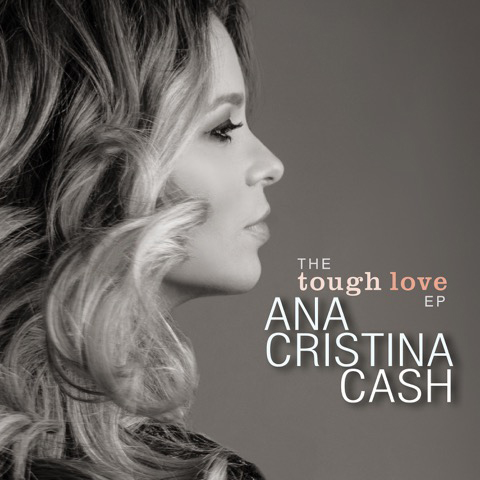