In light of his new single, “Whisper,” releasing today, Chase Rice penned a letter with his personal thoughts on the new music direct to fans. “Whisper” is the first release from Chase’s forthcoming album on Columbia Nashville / Dack Janiels Records, expected later this year, and he also co-wrote it with Chris DeStefano and Jon Nite.

My Honest Letter to You, The Fan 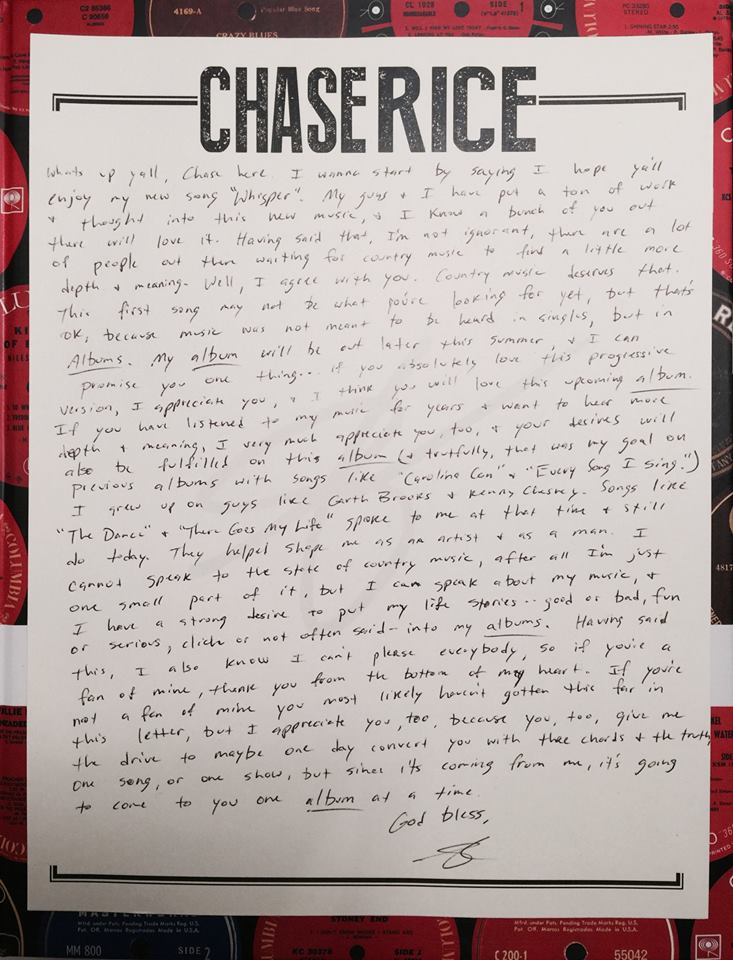 What’s up y’all, Chase here. I wanna start by saying I hope y’all enjoy my new song “Whisper.” My guys and I have put a ton of work and thought into this new music, and I know a bunch of you out there will love it. Having said that, I’m not ignorant, there are a lot of people out there waiting for country music to find a little more depth and meaning. Well, I agree with you. Country music deserves that. This first song may not be what you’re looking for yet, but that’s ok, because music was not meant to be heard in singles, but in albums. My album will be out later this summer, and I can promise you one thing….if you absolutely love this progressive version, I appreciate you, and I think you will love this upcoming ALBUM. If you have listened to my music for years and want to hear more depth and meaning, I very much appreciate you, too, and your desires will also be fulfilled on this album (and truthfully, that was my goal on previous albums with songs like “Carolina Can” and “Every Song I Sing.”) I grew up on guys like Garth Brooks and Kenny Chesney. Songs like “The Dance” and “There Goes My Life” spoke to me at that time and still do today. They helped shape me as an artist and as a man. I cannot speak to the state of country music, after all I’m just one small part of it, but I can speak about my music, and I have a strong desire to put my life stories–good or bad, fun or serious, cliche or not often said–into my albums. Having said this, I also know I can’t please everybody, so if you’re a fan of mine, thank you from the bottom of my heart. If you’re not a fan of mine, you most likely haven’t gotten this far in this letter, but I appreciate you, too, because you, too, give me the drive to maybe one day convert you with three chords and the truth, one song, or one show, but since it’s coming from me, it’s going to come to you one album at a time.
God Bless,
Chase

“Whisper” is available now on digital media outlets, such as iTunes, HERE.