Dierks Bentley had a bit of a mishap at the grocery store the other day! While at the checkout purchasing some ginger beer, Bentley realized that he forgot his wallet.

Lucky for Dierks, his pal Thomas Rhett had also been at the Kroger grocery store and was able to spot him the money for his purchase. Bentley shared on his facebook page, “hit Krogers for ginger beer. forgot money! luckily i knew the guy behind me in line. thx Thomas Rhett ‪#‎moonshinemule‬ 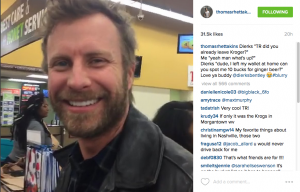 No one knows for certain what Dierks would have done had Thomas not been there, but it’s probably safe to say that someone would’ve stepped up and helped him make the purchase.

Sounds like Dierks was getting the fixings to make some Moonshine Mules! Let’s hope the payback included a delicious beverage as well!