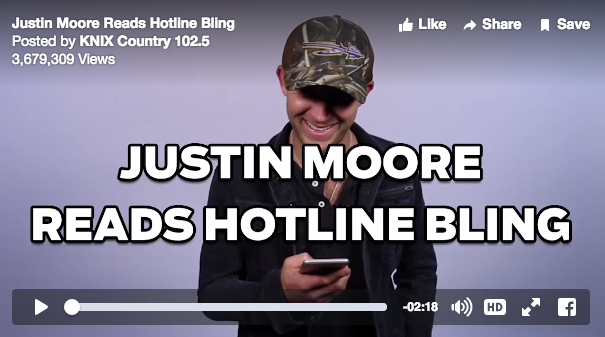 The video’s tagline reads, “There is something funny about this,” and upon pressing play, chart-topping singer/songwriter Justin Moore begins to read the lyrics of rapper Drake’s current hit, “Hotline Bling.”

This hilarious bit from one of today’s most traditional Country artists, whose signature Arkansas twang was on display, was posted on the official website of 102.5 KNIX Country radio station in Phoenix earlier today and has already received over 4 million views in just a few hours. Check it out here.

On Friday, October 30, Justin released his brand-new single, “You Look Like I Need A Drink,” on tap now at radio and digital retailers. The upbeat breakup song – written by Rodney Clawson, Matt Dragstrem and Natalie Hemby and produced by Jeremy Stover, Julian Raymond and Scott Borchetta – has picked up wide praise from press like Rolling Stone Country declaring, “‘You Look Like I Need a Drink’ is a rocking first taste of Moore’s next album.”

The 2014 ACM New Artist Of The Year is currently on the studio working on a new album. Visit justinmooremusic.com for additional information and tour dates.