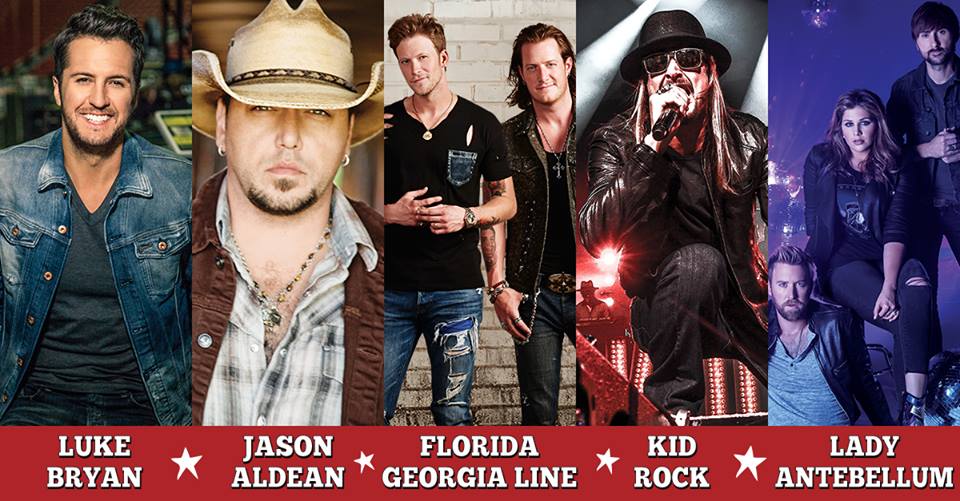 Jason Aldean has been added to the list of previously announced headlining artists that includes Luke Bryan, Florida Georgia Line, Kid Rock, Lady Antebellum and Willie Nelson. Other country superstars on the Country 500 lineup include, Little Big Town, Lee Brice, Tyler Farr, Trace Adkins, Jennifer Nettles, Dustin Lynch, Dwight Yoakam, Frankie Ballard, Jamey Johnson and dozens more. Country 500 will take place on the infield of the world-famous Daytona International Speedway, a historic first mega-music festival inside the hallowed grounds of one of the most iconic motorsports venues in the world.

“The Country 500 is coming to Daytona! From Jason Aldean Friday night to Luke Bryan Sunday night, and a rocked-out home coming for Florida Georgia Line, plus Kid Rock and Willie Nelson on the big Saturday night. Country 500 is a festival like no other,” said Festival Producer Quint Davis. “And the headliner who will not be appearing anywhere else in the world is, of course, Daytona International Speedway itself. The entire festival fits inside the legendary speedway’s massive infield, with plenty of infield camping areas! You can actually camp out inside the track during the festival. If camping is not your thing, we’re in Daytona Beach-with its miles of ocean front hotels close to the track, where you can still drive your car along the beach where American racing all began. The Country 500 at Daytona on Memorial Day Weekend, when Sunday is still a Saturday night!”

“This star-studded lineup of talented musicians will transform the ‘World Center of Racing’ into the ‘World Center of Entertainment’ on Memorial Day Weekend,” Daytona International Speedway Track President Joie Chitwood III said. “Festival Productions – New Orleans has done an amazing job putting together top-notch entertainment that will entertain thousands of guests in the infield of Daytona International Speedway.”

Fans at the festival will also have the opportunity to get up close and personal with some of their favorite country stars at artist meet-and-greets located throughout pit road and the garages. Numerous other features-a select festival menu sold from food booths and food trucks; carnival rides; arcade games; cooling water elements; country-and-western merchandise; fireworks; and more-will all be a part of the festival, as Country 500 transforms racing’s greatest venue into a festival-goer’s dream.