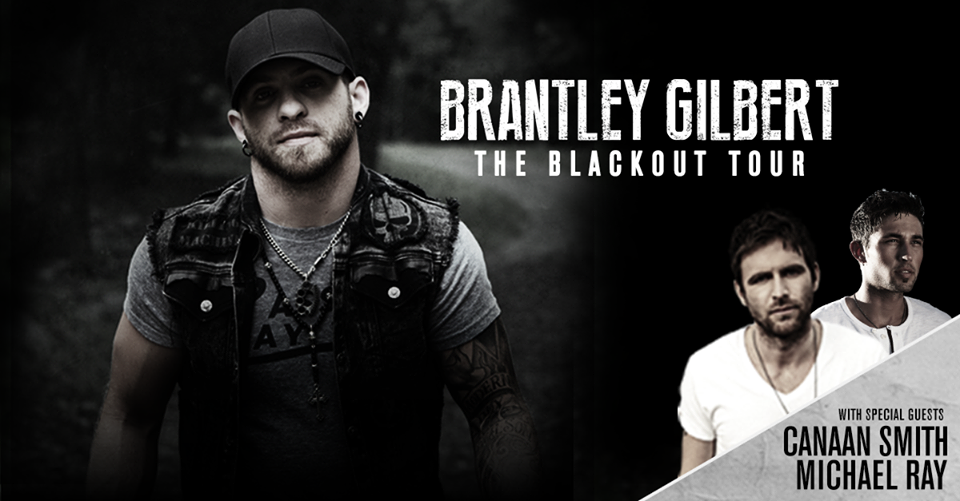 Brantley Gilbert has always pushed the edge when it comes to music. So when it comes to striking out on the road with his BLACK OUT TOUR, it figures the man with back-to-back Platinum albums would never settle for North America alone. Instead, the renegade Country star is hitting the UK, Germany, the Netherlands and Australia, in addition to playing arenas across Canada and the U.S.

“If you’re gonna take it on the road, do it,” the man who won last year’s American Music Award for Favorite Country Album explains. “If you’re gonna push the music, don’t be afraid to put it out there. People around the world get the idea about what we do: these songs are about living life in hard places, but standing up when you do. That’s a universal thing, so let’s do it.”

Kicking off November 11 at Melkweg in Amsterdam, the rough’n’raw songwriter who just hit #1 with “One Hell Of An Amen,” the Gold-certified celebration of living and dying with valor, will swing through Hamburg’s Fabrik, Munich’s Technikum and Stuttgart’s Im Wizemann before heading to Glasgow’s Oran Mor and a sweep through England’s Manchester Academy, the Birmingham Institute Library and London’s storied Shepard’s Bush Empire. An international run more favored by harder rock acts, Brantley handily straddles the line.

“Music is music,” says the man who also wrote Jason Aldean’s chart-toppers “Dirt Road Anthem” and “My Kinda Party.” “I don’t care what you call it, as long as you let me play it my way. I know where these songs came from, what they mean, how they played out – and that is how me and the boys try to bring’em.”

The Georgia-born-and-raised songwriter hits the U.S. January 28 in Saginaw, Michigan for 27 North American dates. The run pauses as Brantley ventures to Queensland, Australia for the CMC Rocks QLD at Willowbank Raceway on March 12.

“This is why I do this,” Brantley says. “To take it to the people. I want to rock hard and tell the truth and see it in their eyes. My fans know what I’m talking about, and they come for that reason. It’s not for everybody, but it’s its own kind of Country… and being out in some of the secondary markets, the kind of places I came up, that feels just like home.”

Tickets for the arena dates will be on sale to the general public beginning Friday, November 6 with a special presale for members of the BG Nation. The Blackout Tour will also feature special guests Canaan Smith and Michael Ray.