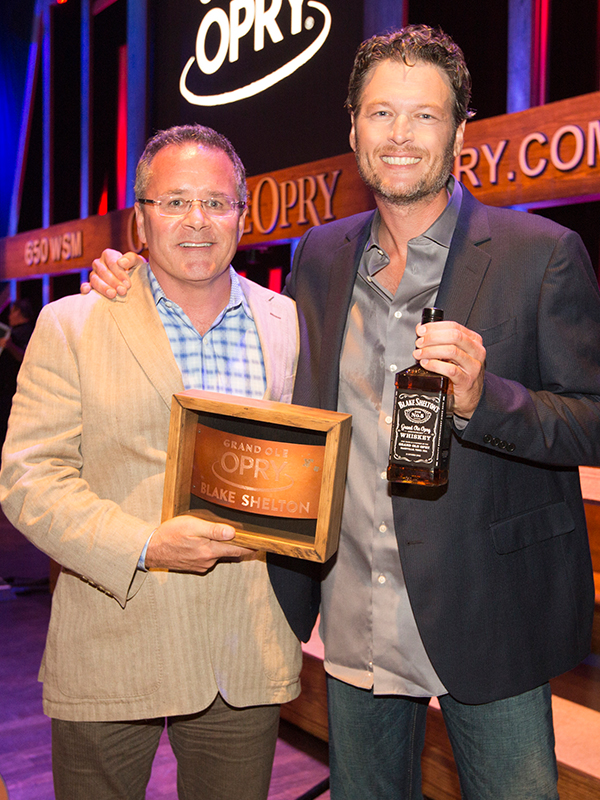 As the Grand Ole Opry® continues to celebrate its 90th anniversary, the show honored one of its own as country superstar Blake Shelton celebrated his 5th anniversary as an Opry member.

Shelton was given a commemorative gift marking both the Opry’s 90th anniversary and his fifth year as an official Opry member. He was also presented with a one-of-a-kind fifth of whiskey to mark the occasion. “They told us Blake was really, really excited about his fifth. Then we decided he might be thinking about a different kind of fifth, so we wanted to cover our bases,” said Opry Vice President and General Manager Pete Fisher when presenting the specially-marked bottle. “This fifth is not available in stores now… or ever.”

“I can’t believe I have my own bottle of whiskey!” Shelton cheered. “I should keep that. How am I not gonna open that?”

“That’s country. That’s redneck. That’s hillbilly,” the Opry member added before being joined on the hit “Hillbilly Bone” by fellow Opry star Trace Adkins, who inducted him into the Opry family five years ago.

Since joining the ranks of the Opry in 2010, he has earned a host of awards and nominations. He returns as a coach for his ninth season of NBC’s Emmy Award-winning reality competition series, The Voice. For more information and upcoming tour dates, visit BlakeShelton.com and follow @BlakeShelton.