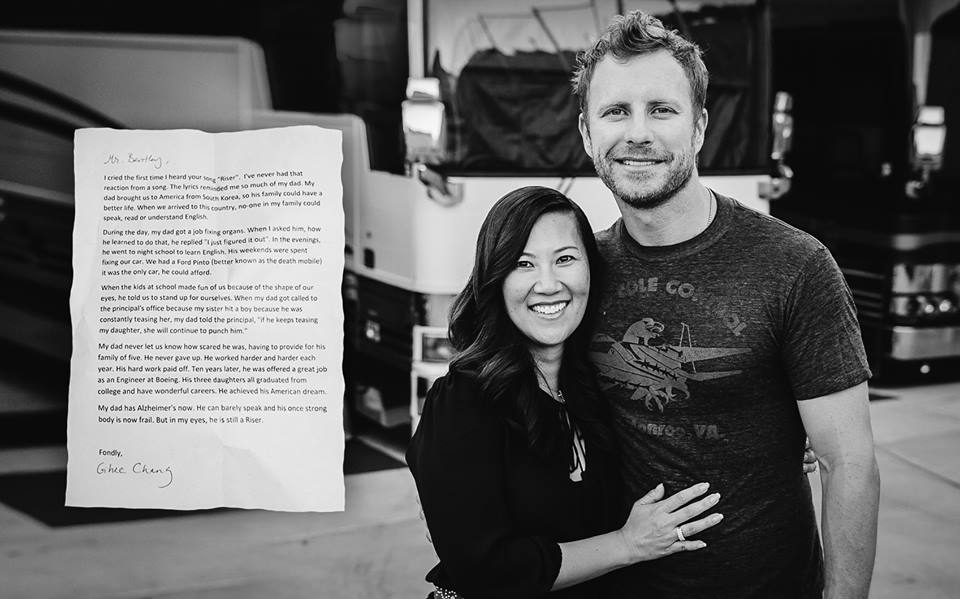 Multi-Platinum singer/songwriter Dierks Bentley’s epic anthem “Riser” has an everyman quality and powerful message that continues to resonates with fans. Night after night on the road, fans share their personal stories on what being a “Riser” means, but last week, it was a letter from a fan named Gihee Chang that caught Bentley’s attention.

“I cried the first time I heard your song ‘Riser.’ I’ve never had that reaction from a song,’” wrote Chang. “The lyrics reminded me so much of my dad. My dad brought us to America from South Korea, so his family could have a better life. When we arrived to this country, no-one in my family could speak, read or understand English…my dad never let us know how scared he was, having to provide for his family of five. He never gave up…his hard work paid off. Ten years later he was offered a great job as an Engineer at Boeing. His three daughters all graduated from college…he achieved his American dream. My dad has Alzheimer’s now. He can barely speak and his once strong body is now frail. But in my eyes, he is still a Riser.”

Chang’s colleagues at CBS2/KCAL9 noticed Bentley posted her letter on social media this week and surprised her with an opportunity to meet Bentley at his SOUNDS OF SUMMER TOUR stop at Save Mart Center in Fresno on 8/20. To watch Chang share her inspiring story with Bentley, click here: http://cbsloc.al/1LocyLx

“Riser” serves as the new single and exclamation point to Bentley’s CMA, ACM and GRAMMY nominated album by the same name, which has already spawned three consecutive No. one’s at country radio. Bentley is set to continue on his headlining 2015 SOUNDS OF SUMMER TOUR. For a full list of upcoming tour dates, visit www.dierks.com.