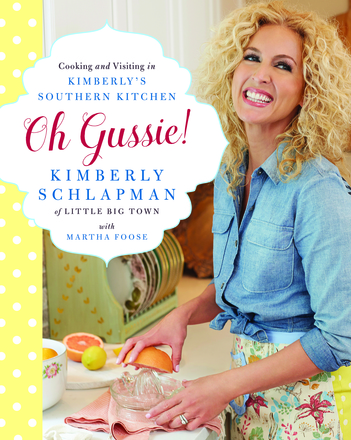 The members of Little Big Town have been the beneficiaries of their bandmate Kimberly Schlapman’s cooking for years, and now the rest of the world, in a way, will be able to enjoy her cooking as well when her first cookbook, Oh Gussie! Cooking and Visiting in Kimberly’s Southern Kitchen, hits shelves April 14th.

“I decided to do it because a lot of people were asking me for recipes because everybody knows how much I love to cook, and I also had this show on television, Simply Southern, and there were a lot of great recipes from that that I wanted to put down and share with people,” says Kimberly. “A lot of these recipes are recipes that have been handed down to me from my grandmothers and from my mama and from friends and other family members.”

She shares recipes and stories from when she grew up in the Appalachian foothills of north Georgia, her travels on tour with Little Big Town and life at home in Nashville, so it’s more than just a cookbook to Kimberly.

“It’s a little bit of a memoir, because I tell a lot of stories of growing up and stories that relate to these recipes, and I tell you a whole lot about my family, and all the way back to when my grandparents were married,” she says. “It’s special to me because it is my whole heart.”

Kimberly and the rest of Little Big Town are making their way up the country charts with “Girl Crush” from their Painkiller album. The song is also in the Top 5 country single download at iTunes.