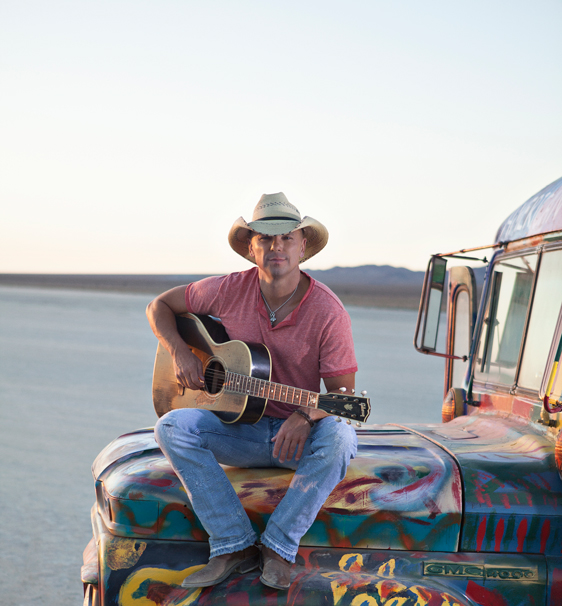 Kenny Chesney knew when he took 2014 off from touring to focus on making his next album, he wanted to push what country could be forward – and still speak to the people who made him the only country artist on Billboard’s Top 10 of Touring Acts of the Last 25 Years. When The Big Revival dropped, it was his 13th No. 1 Billboard Top Country Album – led by “American Kids,” a triple rhythm’ed, lyrically driven, double-hooked celebration of not just coming of age, but thriving in the fly-over.

Unlike anything on country radio, “American Kids” – with a video shot around a psychedelic bus filled with free-spirited young people making music and basking in the euphoria of the moment – went straight to No. 1 and stayed there for two weeks. In case anyone thought “Kids” was business as usual, the editors at Rolling Stone Country just named it their No. 1 Single of 2014.

Topping a chart that featured Sturgill Simpson, Little Big Town, Nikki Lane, Miranda Lambert and Eric Church, the editors wrote, “Few artists have dipped into the well of nostalgia with more success than Chesney. But what made this kicky, catchy tune remarkable is the way it allowed him to ruminate on the old days and yet produce what may be his freshest, most contemporary-sounding single ever — without pandering to current trends. Written by the Midas touch trio of Rodney Clawson, Luke Laird and Shane McAnally, and alluding to Chesney favorites like John Mellencamp, Bruce Springsteen and Elton John, the hook-laden ditty boasts one of the country star’s most nimble vocals to date and reassures that whatever we lived through back in the day may have left us ‘a little messed up, but we’re all alright.’”

“I knew the second Shane played it for me, I was going to cut ‘American Kids’,” Chesney said. “I actually said to him, ‘Why didn’t you play this for me sooner?’ It was the freshest thing I’d heard in years… There’s nothing like it anywhere in any format… and not only does it capture so many details of growing up no matter where you live, it deals with the idea we are all a little messed up, but so what? We’re all alright.

“When you do the unexpected, you never know if it’s going to be accepted. But you have to make records for what you believe is great, what says what people deserve to hear. To me, ‘American Kids’ was all that. So having Rolling Stone Country make it their No. 1 single of 2014, well, that shows the power of the song!”

Grammy nominated for Country Song of the Year, “American Kids” sparked a revolution amongst Chesney’s fans, readying for 2015’s The Big Revival Tour, a varying line-up across 18 stadiums, a few key festivals and almost 40 arenas and amphitheaters.

“The Big Revival did a lot of things people might not expect,” Chesney allows. “From ‘Wild Child,” which puts women in a whole other light, to ‘Flora Bama,’ which takes losing time to a very real place, ‘Don’t It,’ which strips the playing back and lets me sing with my old friend Alison Krauss, to ‘If This Bus Could Talk,’ which captures the journey, this music pushes what I do – and maybe changes up what country music can be in the 21st century. I don’t wanna lose the roots, I just wanna watch it grow.”

Get “American Kids” on Kenny’s album The Big Revival HERE.