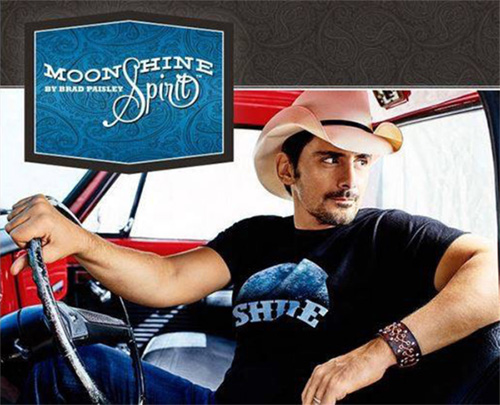 Boot Barn®, America’s largest western and work wear store, is rolling out their exclusive Moonshine Spirit by Brad Paisley line today in stores across the country and online at www.bootbarn.com.

Moonshine Spirit by Brad Paisley blends Boot Barn’s western heritage with a modern, country music edge. As part of the rollout, fans will have a chance to win prize packages, including free merchandise and a flyaway to meet Brad Paisley himself. Contestants can enter on Facebook, Twitter, Instagram and Pinterest by following and liking Boot Barn.

“We specifically chose Brad Paisley to create this line, because his values align beautifully with those of our customers and employees. He is authentic and that’s the essence of every Boot Barn customer,” said Jim Conroy, president and chief executive officer. “We’re really excited to welcome Brad to the Boot Barn family.”

As part of the ongoing partnership, the country superstar appears in Boot Barn’s radio, print and online ad campaigns. Paisley has also mentioned the line on recent national television appearances, including “Late Night with Seth Meyers,” “Access Hollywood,” as well during his recent co-hosting duties with Carrie Underwood at “The 48th Annual CMA Awards.”

“Boot Barn and I have created what I think is an authentic and very wearable line of country clothing,” said Paisley. “It’s hip, modern, progressive, rugged and country — ready for the stage and ready to go out on the town. It’s a great time to launch Moonshine Spirit. It embodies the enthusiasm of my new album, Moonshine in the Trunk.”

Moonshine in the Trunk is available at Boot Barn’s 165 locations across 25 states.

“People have been eagerly anticipating its arrival in stores since the introduction last month, and we’re excited to be able to put it in their hands just in time for the holiday season,” said Laurie Grijalva, Boot Barn’s chief merchandising officer. “His taste in style and design is only rivaled by his talent.”

Aimed at males aged 18-40 seeking clothing with a modern fit, Moonshine Spirit by Brad Paisley features both casual and dressier merchandise, including boots, shirts, jeans, cowboy hats, T-shirts, ball caps, accessories, and a leather jacket. Prices range from $20 for baseball caps to $299 for the leather jacket.