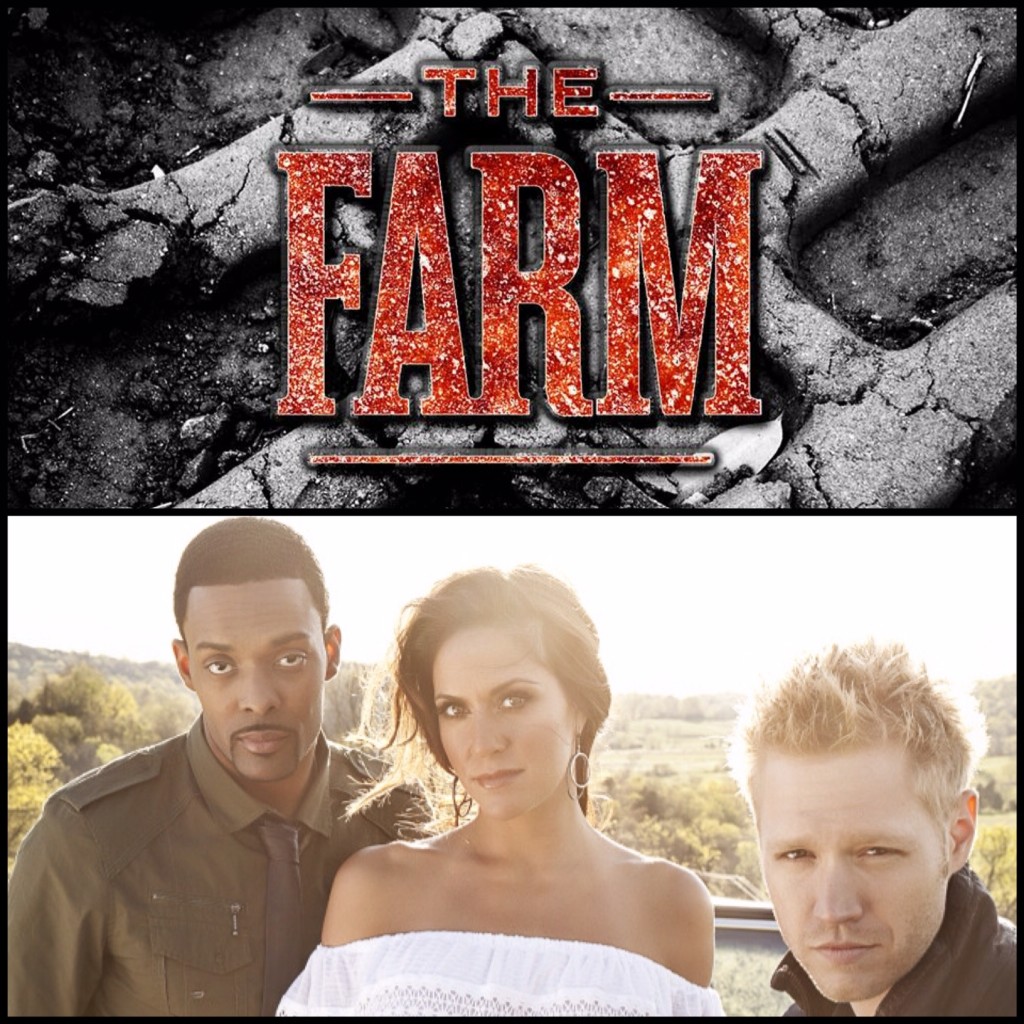 All In Records recording trio The FARM just released their highly anticipated new single “MUD.”  Written by Damien Horne, Krista Marie and Tyrone Carrecker, “MUD” serves as the first release from the band’s forthcoming sophomore album.  SiriusXM has already embraced the new track and it can now be heard on The Highway.

“MUD” represents a new chapter for the energetic trio.  Comprised of Nick Hoffman, Damien Horne and Krista Marie, The FARM is gearing up to embark on a musical journey with the release of brand new music on their own label, All In Records.  Several great things are on the horizon for the band, including the music video for “MUD,” directed by Jayson Wall, and is anticipated for release in the coming weeks.

In an extensive interview with 1/3 of The FARM, Nick Hoffman provided a detailed insight into the band’s new music, upcoming music video, sophomore studio album, and much more!

CountryMusicRocks (CMR): The FARM just released new single MUD to Sirux/XM The Highway. Give us a some background and tell us a little about that song?

Nick Hoffman: The new single is call “Mud” and it’s exciting for us because it’s kind of a new chapter for us. The beginning of the next chapter, I should say. We haven’t had a new song on the radio in well over a year, it might even be a little longer than that, and there has been reasons for that. The biggest reason is that we wanted to make sure that whatever we came back with after our first record was something that not only showed growth for us musically, but with something that we knew was going to be something that our fans would like. When Damien and Krista came from a writing session with this song, I think we all knew right off the bat that this song was going to be a hit. So now it’s all in the people’s hands. It’s fun watching your songs take flight and seeing people’s responses.

CMR: SiriusXM The Highway is spinning the new song & you have caught up with them to talk about your new music. What’s it been like for you guys to have The Highway immediately embrace this new project?

Nick Hoffman: Sirius XM is the one of the biggest advocates for new music in the country format. They have broken so many acts that are now stars that probably never would have gotten heard if it weren’t for John Marks, and everyone at SiriusXM and The Highway. Those guys are advocates for the underdog. In a lot of ways, we are kind of an underdog. We believe that we have something that people are going to like if they hear it and John Marks and Storme [Warren] have embraced us like we are family. We are so thankful for them.
They [SiriusXM] are really leading the pack in country music, for new music. For songs and artists that are maybe in the underground. They are definitely the cultivators of underground country music. What’s cooler though is they are not trying to keep it underground, they are trying to take the underground music to the forefront. They are flying the flag for all the people who probably don’t have a major record deal, who probably do not have all the things in place to break through at radio. It’s tough, and they are advocates for great country music and it’s awesome.

CMR: The new single has a bit of a different sound from your past single releases, does “MUD” set the tone for what’s ahead for The FARM?

Nick Hoffman: I think the coolest thing about The FARM is that the 3 of us are so different musically and we all pull each other in different directions musically. I think what’s interesting is that you never really know what you might get from us. One song might really represent Damien’s R&B and pop roots, and another one might really represent the things that make Krista musically so special. Another one might have a bluegrass & country vibe that comes from me. But together, when we meld all that together, it is always going to end up making an interesting recipe for cool music. That’s what MUD represents. I think it represents a really interesting mash-up of what the three of us are. It’s a fresh sound for us and we are so excited about it.

CMR: How does it feel to get back in the studio to record new music?

Nick Hoffman: It feels great to be back creating new music, especially for a sophomore project. That first project you put everything into it, and then you spend the next two years touring and trying to bring that music out to people and trying to build a fan base. We feel we’ve really done that. Our fans are so dedicated and they are so wonderful. The fans are the people that inspire us to go in and make new music. So it was time. We had to take the time off the road and spend some time creating again. When we finally got in the studio again, it just felt so good. At home as we are on the road and in front of our fans, we’re equally at home in Nashville creating music. It was really fun for the three of us to connect musically again. We hope that people feel it’s as magical as we do.

CMR: Going into this new music, are you guys approaching things differently than you did with your last record?

Nick Hoffman: One way that is different is that with this new song MUD we had a new set of producers. Charlie Pennachio and Sinister produced this song with us and working with them was really fun because they immediately bring an entirely different flavor to our music because they come for a different place. Immediately you can hear Sinister’s DJ beats behind the song and you can hear Charlie Pennachio’s pop influence in it, and I think that obviously is one way our music is definitely different this time around. As the project goes on, you never know, we might be bringing in different producers for different songs, or we may go back to the well and do one with Danny Myrick again. We may do all of them with Charlie and Sinister. You just never know and that is what cool about this project, we are free to do what we want to do. That freedom is really, really exciting for us.

CMR: Speaking of producing, do you foresee yourself co-producing on this new album as you did with The FARM’s debut album?

Nick Hoffman: You never know. Like I said on the production side, I think each song is going to take on a life of it’s own. If one of the songs went to me co-producing, great. If one of them went to Damien or Krista co-producing, great. That’s what cool about us, we don’t have any rules as to how we want to do this. It’s really about creating the best song we can. I know I sound a little cliché, but it’s true.
This time around we are releasing this project on All In Records, which is our own record label. Our first record was a venture with All In Records and Warner Brothers/Elektra. This next one will solely be on All In Records, and that’s exciting because that is a label that the three of us own. Our track record with our first record was on All In Records as well, and it just seemed like the right thing to and keep that imprint together. It feel so good to be an artist releasing music on your own label. I mean, that’s everybody’s dream.

CMR: In addition to it involving a lot of mud what can you tell us about the forthcoming music video?

Nick Hoffman: Shooting the music video for mud was nothing short of a day full of pandemonium to say the least. It was a beautiful day in Whites Creek, TN just outside The Fontanel which is kind of a home away from home for us. It was full of well over 100 extras, friends and family. The local Jeep club came out and got stuck everywhere. We had 4-wheelers, somebody roasted a pig, and everybody brought beer & soda, and kids were there. It was just this thing that took on a life of its own and it had an energy that nobody could have planned. That was what was so special about it. And obviously, when you see it, we are literally covered in mud for the whole video. We are in this big jacked-up truck and it just had a vibe of the kind of fun, and the kind of thing that we call The FARM Party. Jayson Wall, the director, has this amazing energy and he wanted a part vibe. That’s what we did, we brought The FARM Party to Whites Creek and added a little bit of water, mud, and people, and voilà you’ve got a crazy day!

Nick Hoffman: I think the next step for us is doing what we have been doing, and just ramping it back up. We’ve been on the road non-stop since “Home Sweet Home” first came out. For the most part, we have taken the last few months off to record new music and focus on writing. Now it’s about hitting the road again and getting this music out there to as many people as we can, and continuing what we do and bringing The FARM Party to anyplace we can. We’ve got the music video coming out soon and we’re going to be recording the rest of the record soon. Hopefully sometime by mid-2015, we’ll have a brand new record for everybody.

CMR: If there were one thing that you would like to convey to fans about The FARM & the band’s new music, what would it be?

Nick Hoffman: If you’ve never heard The FARM, and I was talking to someone that never heard us, I would tell them this: The FARM is an interesting blend of 3 very, very different people both personally and musically, and that for some reason when we come together I think we create magic. I think that we bring energy, we bring fun and we bring The FARM Party. moving forward, with new music, that’s only going to get intensified. The more music we make, the more fun we have together. Truth is, we just try to blend people in and give them a glimpse into how much fun we’re having. Damien, Krista and I are having the time of our lives right now, and we just want to share this fun with everybody that we can.

“MUD” is available now and is a must-have for your country music playlist!! Grab your copy today on iTunes by clicking HERE.

One reply on “CMR EXCLUSIVE: The FARM Reveals Detailed Insight Into Their New Music”