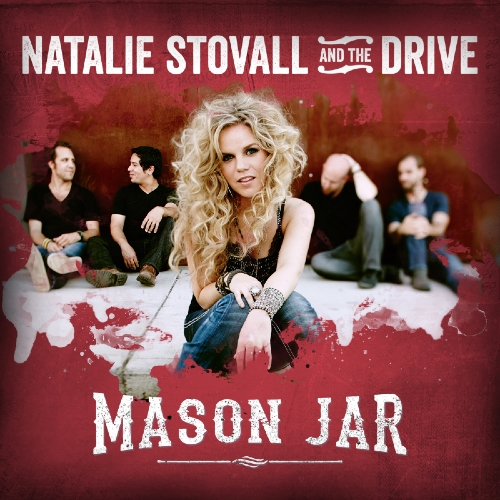 Natalie Stovall and the Drive are excited to get some brand new music out to their fans with the release of their latest single, “Mason Jar.”  The song, written by Sarah Buxton, Jesse Frasure and Tina Parol, is a flirtatious tune with an intoxicating groove, punctuated by Natalie’s signature fiddle-playing, which Rolling Stone Country compares to Joe Perry’s skills on the guitar.  “Mason Jar” is now available on iTunes and at other digital outlets.

The band is partnering with Country Weekly for an exclusive look at a brand new video clip, “Behind The Song: Mason Jar.”  Fans can visit CountryWeekly.com to view an intimate backstage discussion about the band’s brand new single, “Mason Jar.”  The premiere of the clip adds to an exciting week, as Natalie Stovall and The Drive gave fans a “First Listen” of the track via the ACM on Monday.

Natalie Stovall and The Drive, who just returned from their sixth trip overseas to entertain Soldiers, Sailors, Airmen, and Marines serving abroad with the U.S. Navy, has been named “Artist to Watch in 2014” by: Country Weekly, Billboard, Taste Of Country, Roughstock, Digital Journal, Music Times, and more. This summer, People included the band in their “Hey, Country Radio! Here are Six Women Whose Music You Should Be Playing” List and Rolling Stone proclaimed them a “Must-See Act at CMA Music Fest.”  The band has enjoyed success at country radio in 2014, claiming a Top 5 Most Added slot and the highest charted female on a debut single so far this year.  The critically acclaimed band’s debut album, produced by GRAMMY winner Paul Worley (The Band Perry, Dixie Chicks, Lady Antebellum), is expected to release next year.