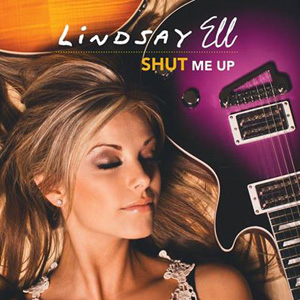 Stoney Creek Records star Lindsay Ell is already turning heads with the release of her scorching, guitar-driven new single “Shut Me Up,” which debuted today as the #2 Most Added Country Song in the U.S. with 31 first week stations.

The song has been hand-picked by Townsquare Media editors for its multi-genre “Hot Releases” campaign, sponsored by McDonalds. The “Hot Releases” playlist will be featured across syndicated tastemaker sites including Taste of Country, Popcrush, Loudwire, Just Jared, The Boot, Consequence of Sound and more beginning this Friday, August 15th.

Additionally, “Shut Me Up” will be featured prominently on-air all week as part of SiriusXM The Highway’s “Fresh Female Voices” campaign.

Taste of Country exclusively premieres the lyric video for “Shut Me Up,” which is unique to the video genre.  Alongside the song’s lyrics – some written in Ell’s own cursive – the lyric video features brazen silhouettes of the Stoney Creek Records star as she performs “Shut Me Up.”

Written by GRAMMY award winners Zach Crowell, Brett James and Hillary Lindsey, “Shut Me Up” allows Ell to show off not only her lead guitar prowess but also her vocals and performance skills.  All three have earned the rising star critical praise from the likes of Rolling Stone, Guitar World, Billboard and more.  Just last week, Ell was heralded by Teen Vogue as “your coolest new girl crush” in an article spotlighting ten of the summer’s hottest new country acts.  Read it here: http://www.smarturl.it/dt19qj

“Shut Me Up” is available now at iTunes: http://smarturl.it/shutmeup-single