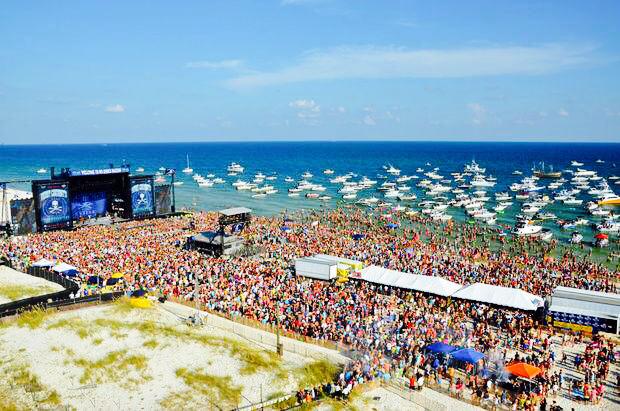 There was a pirate ship, inflatable crafts, yachts, shrimp boats, skidoos and paddle boards when the No Shoes Nation took the beach behind the legendary Flora-Bama Lounge. At straight up 5pm, Kenny Chesney walked down the strut in orange cargos, a grey t-shirt and a ball cap, strummed a chord and sang, “Sittin’ here at the Flora-Bama/ Bout to open up a big ole can o’/ good times…”

The crowd of over 40,000 – coming from as far away as Oregon, Ohio, South Carolina, Arkansas, Oklahoma, Arizona – was primed, singing along to the song just released as an Instant Grat Track to celebrate the stadium show without a stadium. For Chesney, who took 2014 off the road to concentrate on making The Big Revival, hearing the crowd so loud moved him.

“Man, when those people kicked in and started singing ‘Flora-Bama’ back to me, that just hit me in the heart,” says the man The Los Angeles Times called “The People’s Superstar” of the crowd’s response. “A year without touring takes me away from that, and those fans… whether they know it or not… inspire me. So having spent the year writing and recording, that was like plugging into the source.”

Evidently–Chesney’s 32-song set lasted two and a half hours. Mixing old favorites “How Forever Feels” and “Don’t Happen Twice,” acoustic numbers “Old Blue Chair,” “You and Tequila” and the acoustic-turning-full-impact “When I See This Bar,” he also brought out frequent co-writer David Lee Murphy as a surprise, trading verses on Murphy’s hits “Dust On The Bottle” and “Party Crowd.”

“Since David Lee wrote ‘Flora-Bama’ with me, I know he knows about the heart and the soul of the people down here, how much they love music and love life,” Chesney says of the walk-on. “There’s a real vibe when people connected with the moment experience something that moves them… and David Lee had’em singing along his songs, too.”

For Chesney, his stadium stage sitting on the sand wasn’t even coloring outside the lines. Employing his sound system for those shows, as well as relay speakers around the 1/3 of a mile imprint – and also speakers pointed to sea for the boaters, it was a show beyond proportion. People started arriving yesterday, and were in line all night to get in.

“We had the No Shoes Navy, the No Shoes Nation, people who aren’t afraid to get out there and live and just experience the moment. The fact that we could announce this show two weeks ago, build it and have that kind of response to a crazy notion I had – one that started out with playing a little Keg show in the upstairs of the club and turned into a great big show on the beach? It says a lot about my team, the Flora-Bama’s John McInnis and Cameron Rice and especially the people who came from all over to be here with us.”

Filmed by Shaun Silva for a TV special this fall, Chesney and band took the tailgate vibe of his shows and distilled it. Bikinis, shorts, tank tops, sunburns and ball caps, the dress code was casual and the mood was great. As the 4-time CMA and 4-time ACM Entertainer of the Year said, “It was a party. It was a day at the beach. It was a good time. But mostly, it was the gathering of the No Shoes Nation for the music, and the fun, and just getting to see each other.”