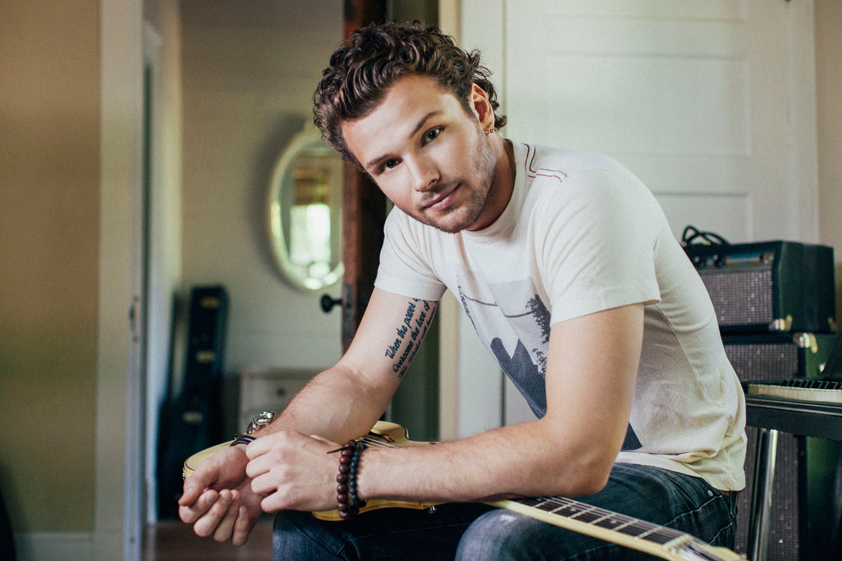 Country Music Newcomer Joel Crouse is gearing up to release his debut album EVEN THE RIVER RUNS on August 19.  The album includes 10 songs, including hit singles “If You Want Some” and “Why God Made Love Songs.”  CountryMusicRocks got the chance to catch up with Crouse to chat with him about his forthcoming debut album, heading out on tour with Love and Theft and much more!

CountryMusicRocks (CMR):  The countdown is on for the release your debut album EVEN THE RIVER RUNS. Tell us a little about the album and how would you best describe the album?

Joel Croue: Really it’s just the story of my life. I wrote about situations that happened when I was 16. It’s really kinda my life from 16 – 20. I finished the record a couple of years back, “If You Want Some” was the last song I wrote for it.  All these songs really have been my story and my journey being in Nashville, and some of the stories that happened to me while I was still living at home in Massachusetts.  So really this is just going to be a good introduction in to who I am as an artist and as a person.

CMR: You co-wrote all 10 songs on the album. When you started this whole process of your debut album, was that something that was important to you to have your mark on each of the songs, or did it just happen that way with the songs that were selected for the album?

Joel Crouse: Not at first. When I first moved to Nashville, I thought every artist wrote their songs. That’s why I started writing so early.  Then when I got here, I realized there were other songs.  There were other songs that I looked at that other people wrote, but when I first stared writing this record with Jamie Houston we just kept getting good songs.  In fact, our second song we ever wrote together is on this album, “You Can Break A Heart Like That,” we wrote when I was 17.  Honestly we listened to outside songs, but it just kind of came that we really dug what we wrote and we loved the record that we made. It turned out to be a blessing to have my name on each song. I think I’ll probably do the same from here on out.

CMR:  Tell us about the song Even The River Runs, and what made you choose that song as the album title?

Joel Crouse: I chose “Even The River Runs” because I wrote that with Jaime [Houston] and Craig Wiseman, and this song is really about my dad sitting me down and telling me you can’t do music sitting at home in Massachusetts, you need to go to Nashville. I had already been to Nashville at this point.  He said you’ve got to go to Nashville and stay there, this is where you need to be to get to that next level. It is kind of a realization of where I need to go to pursue what I want to do and follow my dream.

CMR: You’ve been out on the road pretty much non-stop since you released your debut single, ‘If You Want Some,” and it was just announced that you’ll be joining Love And Theft’s Night That You’ll Never Forget Tour this fall. Tell us a little about that and what are you most excited about hitting the road with Eric and Stephen?

Joel Crouse: It’s cool because I’ve been friends with them for a while. They’ve always been cool with me, especially when I was a new artist coming up. The first time I met Stephen I think I was 19 at CRS or something, and we just kind of hit it off.  He’s a cool dude.  I’m a big fan of their tunes, I’ve been following them for a while.  When they gave me the call to ask to be on their tour, I was pumped. It’s going to be exciting to play with friends of mine and we are all sharing a bus, like the old caravan style back in the 60’s. It’ll definitely be an interesting, fun time.

CMR: You’ve been performing a ton lately. At this point, what is your favorite song to perform live?

Joel Crouse: One of my favorite tunes to perform live, there’s a couple of them.  I really dig “Summer Love” just because it is very energetic played with a full band, the crowd really digs it.  Another one of my favorites is “Ruby Puts Her Red Dress On” because it really kind of connects with the audience on a different level.  It’s one of the only story songs that I play that is not my story.  I got to tell the story that was inspired by two friends of mine that went to Afghanistan, and a buddy of mine lost his life a few years back. It was inspired by a bunch of different things, and I really like playing that one live because it’s a little different and I think the crowd really digs it.

CMR: You are very active on social media, specifically twitter and instagram. Do you feel like you have a stronger connection with your fans because of social media?

Joel Crouse: Yeah definitely! There are a few of them that I’ve actually got to know. One of them showed up with my face on a stick at one show, so that was fun!! There are fans that are just really, really loyal, and some people that actually really get to know you and what you like personally.  It’s cool. Social Media definitely opens up that avenue of being connected with your fans.

Some of my favorite twitter accounts… I follow Ed Sheeran a lot, he’s pretty funny. I would follow my guitar play Kyle Rife, but he tweeted one time ever, and the tweet says “Well… Philly huh?”  I follow a lot of news, John Mayer, Swifty.  I follow Darius [Rucker] because sometimes I’m excited to see some of his responses to people. I follow a bunch of different people.

I follow Darius on Instagram, and I follow a lot of friends on Instagram. I like following things that have to do with lions, I’ve got this weird thing about lions. I really dig them. Anyone that is posting lion pictures I usually follow, or nature pictures, or beaches… I follow the Lakers, my favorite basketball team, Charlie Worsham, Brothers Osborne, Kacey Musgraves…. I’m a little more active on instagram, I think.

EVEN THE RIVER RUNS becomes available on Tuesday, August 19.  Pre-Order your copy on iTunes now by clicking HERE.