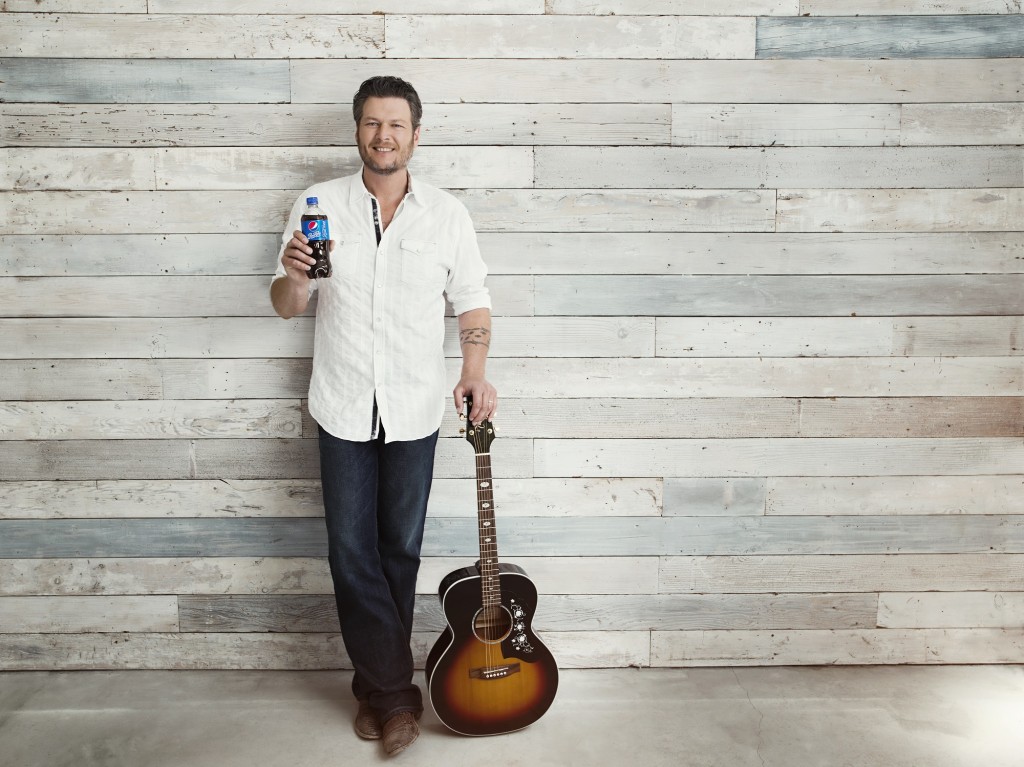 Today, Pepsi announced a partnership with CMA Entertainer of the Year Blake Shelton to kick-off summer 2014 in a big way with a special remote performance by Shelton on a Pepsi-branded stage during the “2014 CMT Music Awards” airing live June 4, 2014 at 8 p.m. ET/7 p.m. CT in Nashville, Tenn.

The performance, appropriately titled, “CMT’s Real Big Pepsi Block Party,” will take place from Nashville’s iconic Broadway, marking the first time ever that the country music star and 2014 CMT Music Award nominee has performed as part of the live CMT show. Shelton’s performance will also celebrate the launch of a partnership between the artist and Pepsi.

“I am excited to partner with Pepsi, a brand that has a long history of bringing music artists like myself closer to our fans,” said Blake Shelton. “Summer is one of my favorite times of the year, and Pepsi and I will make sure this season is bigger, better and more memorable than ever for fans across the U.S.”

Leading up to Shelton’s CMT Music Awards performance, Pepsi surprised 24 fans throughout Nashville, awarding them a VIP experience at the remote performance. The surprise delivery brought to these 24 unsuspecting fans was captured on camera and will be part of a special Pepsi TV commercial that will air during the CMT Music Awards. Additionally, CMT and Pepsi asked fans to submit their best original Shelton lyrics in a contest, awarding his biggest fan with a trip to see him perform live tomorrow at the CMT Music Awards, with premier access to the red carpet, tickets to the country music celebration and a $1,000 shopping spree. Immediately following his live performance, CMT and Pepsi will release a second exclusive Blake Shelton performance from the Pepsi stage at the CMT Music Awards, and will invite fans to tweet #BlakeNow to receive the exclusive content online.

“Nothing says summer better than live music, and who better to kick off the season with Pepsi in a big way than iconic artist Blake Shelton,” said Lou Arbetter, Senior Director of Marketing at Pepsi. “As Blake gets ready for his U.S. tour we are thrilled to welcome him to the Pepsi family and take his fans along for some surprise experiences on the way.”

Throughout Shelton’s tour, Pepsi will upgrade some of country music’s biggest fans with VIP access, in addition to giving consumers the chance to sample new Pepsi Made with Real Sugar, and two limited-time flavors – Vanilla and Wild Cherry Made with Real Sugar. Shelton will also appear in POS signage nationwide.

Dating back to last year, Pepsi brought fans closer to their favorite country artist at the 2013 CMA Music Festival in Nashville. Shelton made a surprise appearance in front of the Pepsi Music Bus in the Music City Center and joined fans in Pepsi contests and activities with big payoffs.

Pepsi also engaged Shelton during this year’s 2014 Super Bowl when he performed in front of consumers and veterans at PepsiCo’s #PEPCITY dome in Bryant Park, where PepsiCo donated $1 million to the Bob Woodruff Foundation.