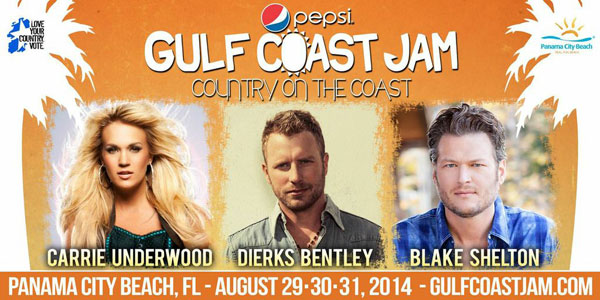 Festival goers can enjoy a complimentary shuttle service to and from most preferred lodging partner locations throughout the day. The day stage performances will take place on the beach at M.B. Miller County Pier and the nighttime headline performances will return to Frank Brown Park. Preferred lodging packages are still available at numerous locations in Panama City Beach which include access to a special viewing area at the main headline stage between General Admission and the VIP Pit, as well as General Admission ticket benefits. General Admission, Military tickets, Preferred Lodging, VIP Pit tickets and Side Stage VIP tickets are all still available to purchase HERE.

The highly anticipated Country music festival is already selling out lodging packages and tickets are set to increase on June 2nd. Last week, Pepsi Gulf Coast Jam launched another unique social media campaign to reveal the lineup, inspired by the 57,000 square foot gaming floor and 1,600 electronic gaming machines at the Wind Creek Casino and Hotel in Atmore, AL, one of the festivals leading sponsors. The faux “Jamble Machine” revealed clues about the artists in the lineup and the campaign encouraged festival goers to unscramble jambled phrases by sharing, liking, commenting and retweeting the posts on their social platforms.

The search is underway for Pepsi’s 2014 Southern Original who will win a Main Stage performance slot, opening for Blake Shelton on Sunday, August 31st. Applications are open through midnight on June 25th and can be found HERE.